All You Need to Know About Ripple

Ripple is comprised of two separate components: XRP and RippleNet. XRP is considered a cryptocurrency, whilst RippleNet is a payment network designed for enterprise. It was built to allow banks and other institutions to transfer money and assets across borders more quickly and with lower transaction fees.

Ripple is typically categorized as a type of cryptocurrency or blockchain-based platform but it’s not really either of these. Whilst it does share some similarities with other blockchain platforms like Ethereum and cryptocurrencies like Bitcoin, it has a few distinct differences that set it apart.

Firstly, it doesn’t use blockchain to provide consensus. Instead, it summarizes data using a HashTree and compares this data across its validating servers.

Secondly, unlike most other cryptocurrencies, XRP can’t be mined. All 100 billion XRP tokens were produced and distributed at its inception.

Many people see this detraction from the cryptocurrency-norm as a cause for concern and criticize Ripple for going against the core values of cryptocurrencies. Nonetheless, Ripple must be doing something right as XRP is currently the third largest cryptocurrency by market cap and is seeing widespread use by financial institutions across the world.

TFG has created this page of content to help traders to learn more about this useful payment network.

Ripple was released back in 2012 after being co-founded by Jed McCaleb and Chris Larsen of OpenCoin. By 2018, the company had experienced 36,000% growth and established a growing network of some major global banks.

But how did this incredible success develop over time? Let’s look at a brief timeline of events:

Ryan Fugger is inspired to build a decentralised platform that can be used by individuals and communities to make their own money. He builds the first primitive version of the platform on RipplePay.com

Jed McCaleb begins development of a digital currency that determines its value by consensus as opposed to mining. Fugger hands over RipplePay to Jed McCaleb and Chris Larsen who rebrand the organisation as OpenCoin.

OpenCoin secures $2.5 million from angel investors and rebrands itself again as Ripple Labs. They make the Ripple code open source and release an iPhone app which is later withdrawn.

More banks begin to come on board, notably Santander and the Royal Bank of Canada. They rebrand for a third time, dropping the ‘labs’ to become Ripple.

Ripple is allowed to operate in New York State and receives millions in funding.

Ripple is recognized as a payment system by the largest banks in the world and goes on an incredible run, growing by 1000% in the last month of the year alone.

Below is a graph which illustrates the change in the price of XRP over time: 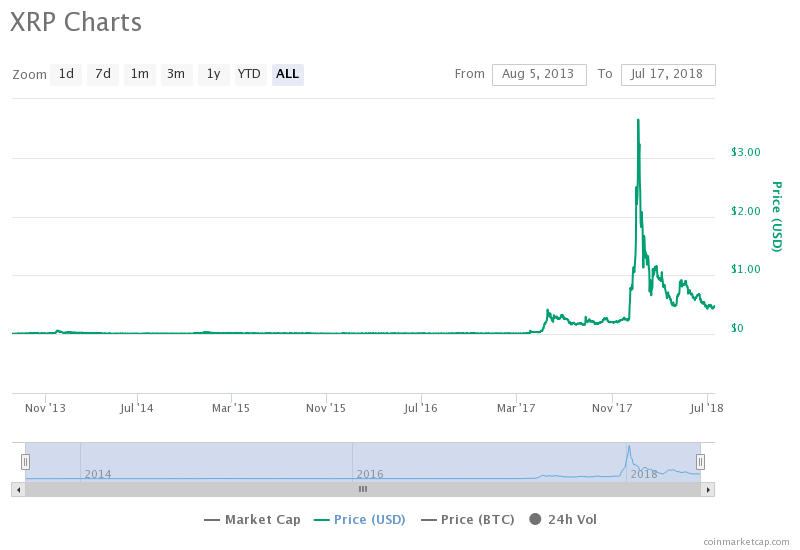 Many cryptocurrencies have multiple use cases and lack a specific focus. This attempt at having
a broad appeal has its benefits, but it also causes confusion and a lack of direction. Unlike these
other currencies, Ripple was designed with a clear use case in mind.

It’s specifically built to facilitate the exchange of money across the world with minimal costs.
International payments are traditionally very slow and costly, and it’s long been thought that the
system needs to be modernized. Ripple achieves this by allowing banks and financial
institutions to transfer tokens in real-time, securely and at a reduced cost.

In practice, this can help people such as those living overseas to transfer money to their home
country without incurring large fees.

Three practical use cases for Ripple are:

Trade finance has always involved long paper trails and expensive transaction fees. A case has
been made many times for the digitization of trade finance as it’s thought that digitizing
processes will allow cross-border payments to be made faster, more securely, and more
efficiently.

This could be made possibly by the use of blockchain and other distributed financial technology.
Manual processes could be reduced by allowing authenticated information and documents to be
shared more easily and increasing transparency. TFG has written about this in more detail on
this page.

Ripple is ideally suited for use in trade finance as it was specifically built to support cross-border
payments and international transactions – a ‘bitcoin for banks’, if you will.

A movement towards using this technology has already begun, with many major banks across
the globe trialing distributed ledger technology, of which Ripple has been a major part. A cross-
border payment system has been tested with 12 banks using XRP to re-balance liquidity in real-
time.

The below table outlines the main advantages and disadvantages of Ripple:

Here are 5 fun facts about Ripple: