Technology is widely used to support the internal trade finance processes of African banks, DFIs and alternative lenders. The digital tools that they deploy range from Microsoft’s basic suite of programs to the more sophisticated systems such as Ecobank’s OMNI eFSC (Electronic Financial Supply Chain) software. However, these solutions exist in silos with disjointed usage and application. 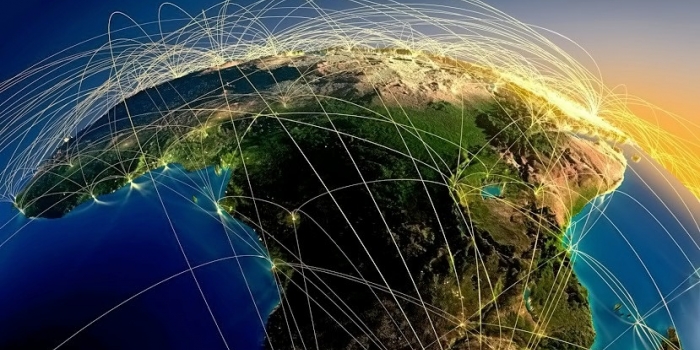 It’s time for a broad-based discussion on how to leverage the network effects of technology to address some of the structural and economic issues within the industry. TFG heard from Theo Cooke, Engagement Manager at Orbitt on the state of the African trade finance gap.

Technology is widely used to support the internal trade finance processes of African banks, DFIs and alternative lenders. The digital tools that they deploy range from Microsoft’s basic suite of programs to the more sophisticated systems such as Ecobank’s OMNI eFSC (Electronic Financial Supply Chain) software. However, these solutions exist in silos with disjointed usage and application. 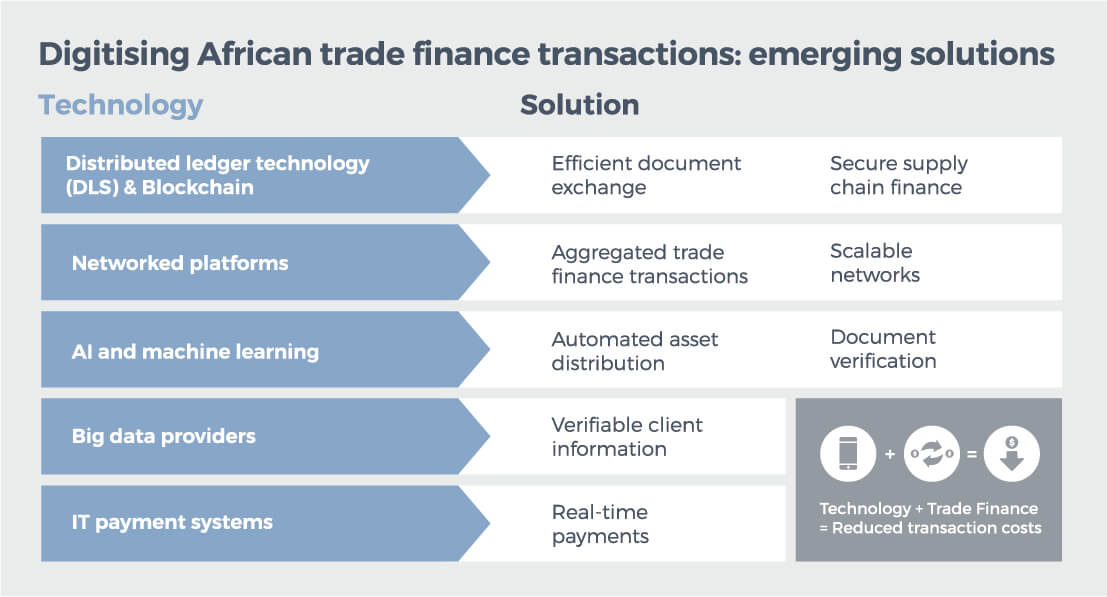 The current deficit in accessible company information and credit history data is a challenge for funders. As more data and credit information on African businesses is made available in an intelligible form to banks and alternative lenders, the gap between perceived and actual risk starts to narrow and more funding can be made available to these enterprises. Innovative startups such as Asoko Insight, Matchdeck and Fraym alongside the more established players like Moody’s are building out valuable pools of information for the industry.

According to Bain & Company, the application of blockchain could increase global trade volumes from the current levels of US$1.1 trillion to US$16 trillion by 2026. The reasoning behind this outlook is the ability of blockchain to eliminate paper-based processes, minimise fraud risks in letters of credit (LCs) and reduce the average African trade transaction lifecyle from 20 days to under 24 hours. In 2016, using the Wave platform, Barclays Africa became the first organisation in the world to execute
a live trade using blockchain technology. This verified ownership and transaction-related documents in under 4 hours (and therefore goods) for the trade of cheese and butter between Ireland and Seychelles. Similarly, HSBC and ING carried out the first commercially viable trade finance transaction via blockchain in 2018 using R3’s Corda software. A letter of credit for the soybean trade between Argentina and Malaysia was executed on a single shared platform, taking under 24 hours to complete after the
details were shared between the banks.

The free flow of goods and services is a key factor in increasing intra-African trade. Nonetheless, of equal importance is the velocity and efficiency of financial flows between neighbouring countries, regions and institutions. Initiatives such as Afreximbank’s Pan-African Payment and Settlement Platform (PAPSP) will be crucial in meeting the targets of the AfCFTA. The system is aimed at lowering transaction costs and supporting informal cross-border trade, currently estimated at US$93 billion. On a regional level, the Southern Africa Development Community (SADC) launched their Integrated Regional Electronic Settlement System (SIRESS) to settle payments between participating banks in South African rand. According to SWIFT, since inception in 2013, 83 participants have carried out 712,099 transactions on the system with a total value of 3,100 billion rand. This has resulted in faster settlement time, reduced settlement risk and lower transacting costs.

The region is also making good progress towards the creation of a multi-currency payment system, with the United States dollar expected to become the second currency of settlement during 2019.

Although African Trade Finance is someway off achieving a transformation through AI, its usage has progressed at a rapid rate within the banking industry. Natural language processing and AI technology have witnessed higher adoption in retail banking, such as ABSA and UBA’s recently launched chatbots. But AI will no doubt become increasingly important in terms of automation, cost reduction and increasing efficiency for trade finance. With improved access to company data, deep machine learning should arm trading partners with transparency and predictability and provide a greater capacity to identify potential noncompliance, anti-money laundering (AML) and fraud risks.

Each player within the ecosystem has their own preferred technology solution. For example, Ecobank has its Omni platform while Standard Bank uses a Hyperledger Fabric-hosted blockchain platform for FX payments. Although each of these solutions deliver individual value to the bank or owners, they represent digital islands. By harnessing network effects, counterparties can further optimise their shared and proprietary value. In real terms this means faster, broader and more efficient provision of trade
finance products to growing businesses in Africa. 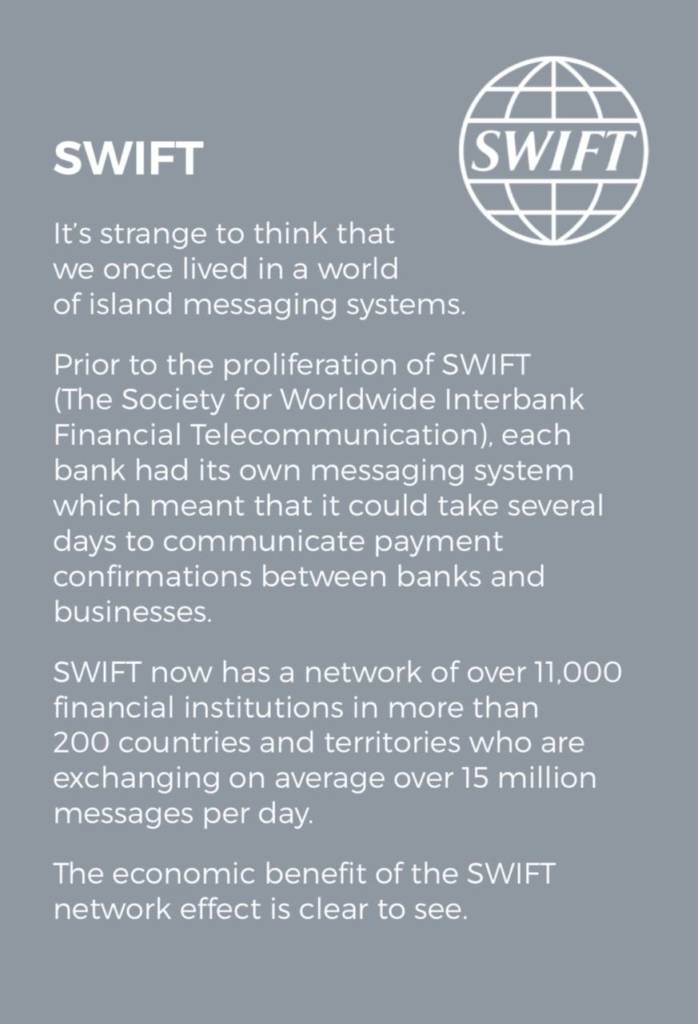 The African trade finance ecosystem can use SWIFT as an inspiration to adopt a single networked platform. Banks should be able to leverage algorithms and smart matching technology to originate transactions and syndicate loans with other non-bank lenders under the same digital roof.

A valuable network should also allow lenders to source insurance wraps from intermediaries, hedge foreign exchange exposures, place forward orders with brokers and secure logistics providers. The transformative power of such a network can plug a significant percentage of Africa’s trade
finance gap. Transaction time will reduce by eliminating the long turnaround times in moving documents between trade service providers, banks, government bodies and logistics companies. More importantly, platforms can aggregate the smaller trades that are currently off-limits for many Africa-focused financiers. Uneconomical trades across the continent then become viable and profitable.

How to build a large, scalable and valuable trade finance network for Africa

Help from above – a role for SuperNodes

There isn’t a one-size-fits all technology solution to Africa’s trade finance gap. Networked platforms need collaboration and significant investment from all the participants in the ecosystem. For Africa this means the banks, DFIs and government bodies. A strong digital trade network would also encompass the regulators, trading companies, logistics hubs, shipping firms, financial service providers and customs authorities. The onus should fall on multilateral institutions to take the responsibility and assume roles of ‘supernodes’. The best placed organisations to do this are the DFIs (inherently development- focused) and large banks (capital-abundant).

These actors have the sufficient scale to coordinate and invest in technologies that can help them attain the penetration they are mandated to realise. As a by-product of increasing access to shared financing and collateral information, the network will be able to help its individual participants reduce their risk for future transactions.

A ‘supernode’ should also be able to share information between a regional bank, government port and company network. The company network tracks the flow of goods and customs documentation; the bank tracks relevant data to the borrower and end buyer.

The potential to increase intra-African and inter-regional trade using this approach is substantial. Especially when we envisage that these processes can take place within a networked platform using blockchain technology, leveraging Africa – focused data resources and implementing smart payments solutions.

The time is now

Trade remains the cornerstone of African economies and contributes 51 percent of the continent’s total GDP per year. The widening trade finance gap needs to be bridged with a multifaceted approach. Banks, DFIs, traders and governments should recognise that adopting new technologies is a critical pillar to addressing this gap.

By bringing a digital-first approach to the top of the agenda, all parties within the ecosystem can harness the benefits. An economic area is no longer defined by traditional boundaries, rather by digital data flows, and Africa needs to digitise its Free Trade Area to enable it to incorporate at scale. Many countries across the continent have already proved that they can leapfrog development in other areas.

With technology as a driver and institutional support as a mechanism, Africa has the chance to set the pace for the future of trade across the world.

Following a spell with a boutique Africa-focused investment firm in London, Theo spent two years at africapractice working on stakeholder engagement mandates for financial services clients across Africa. He has worked on projects in over 10 countries on the continent. Theo holds a BA in French from the University of Bristol.