Changing Tides: The Role of Politics and Technology in the Globalisation Process

Globalisation is often talked about in general terms, treating it as one constant process. However, it is important to recognise that it has actually occurred in three distinct waves. Whilst… read more → 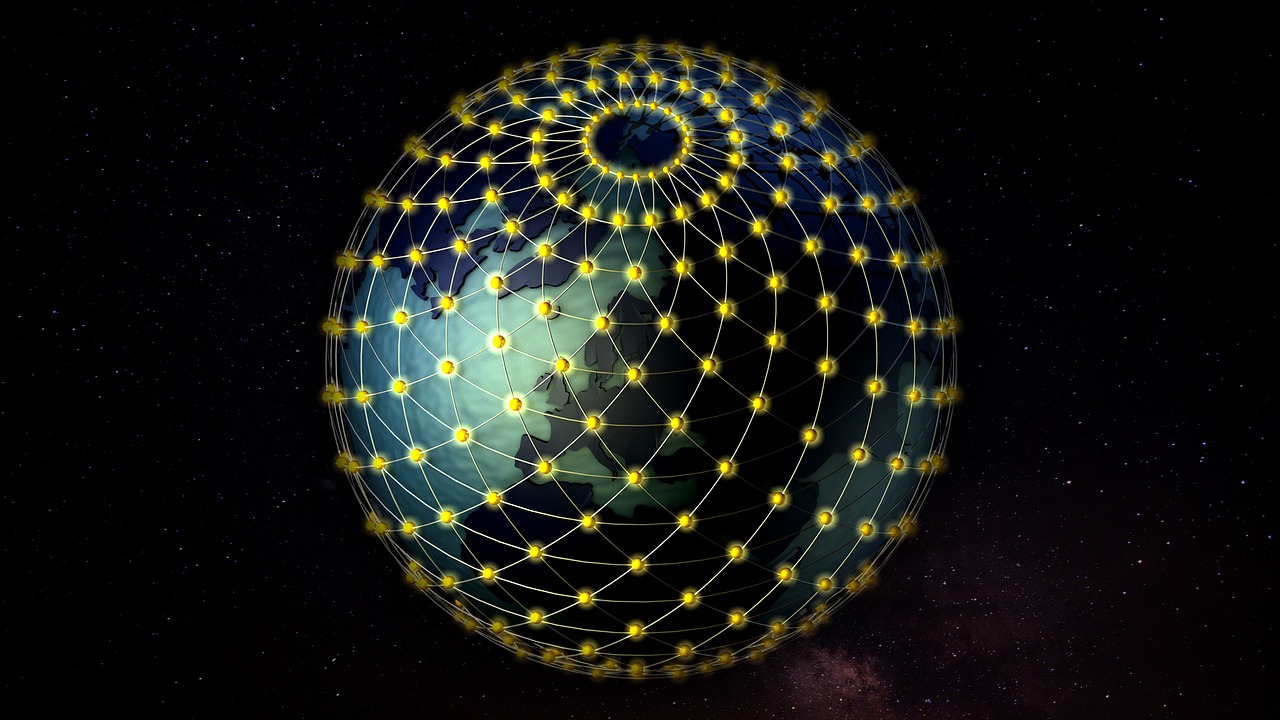 Globalisation is often talked about in general terms, treating it as one constant process. However, it is important to recognise that it has actually occurred in three distinct waves. Whilst each one is different in terms of scale and composition, there is a common theme that can be identified in all three waves. This is the fact that it is the combination of political change and technological innovation that starts each wave, and it is politics on its own that ends each wave.

This has particularly important ramifications for today’s current global economic environment as many debate whether the rise of protectionist politics, typified in Trump’s election and the Brexit vote, signifies the end of this third wave of globalisation. This article will therefore consider the role that politics and technological innovation have played in the three waves of globalisation.

Repeal of the Corn Laws

The first wave of globalisation began in the middle of the 1800’s when the UK, embracing the Ricardian logic of free trade, repealed its Corn Laws. These laws protected British agriculture from imports and therefore this repeal was a vital step in the international integration of Britain (the global economic leader of the time).

At the same time as this political reform there were a number of key technological innovations made in both transport and communication. The most important of these being the internal combustion engine and the telegraph. These innovations helped facilitate this more international political outlook by reducing the cost and speed of transport and communication over long distances. 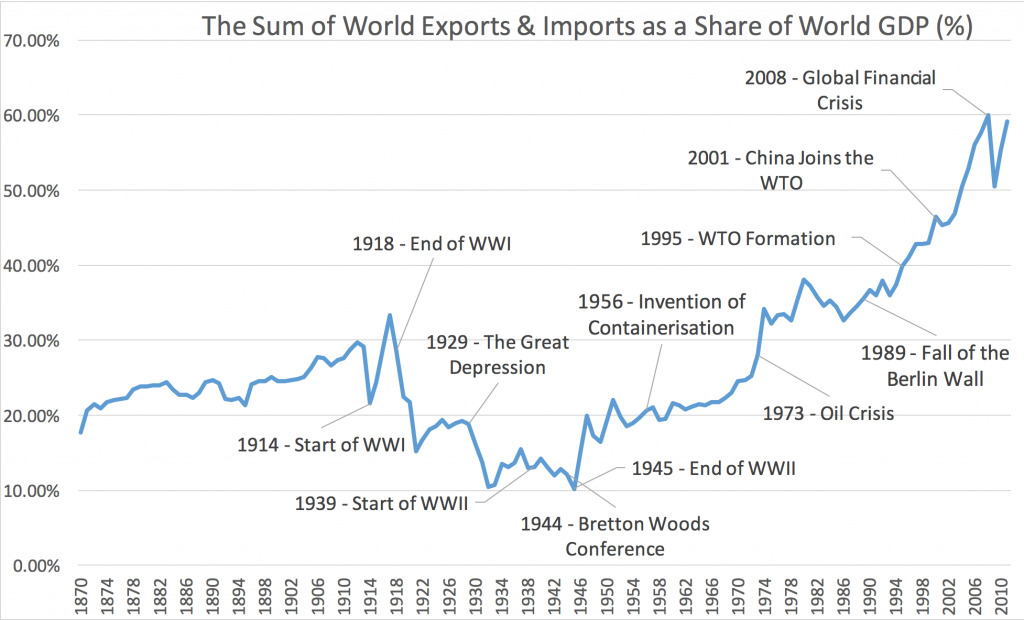 Despite this war ending only four years later, due to various events in the 20s and 30s, most importantly the great depression in 1929, the second wave of globalisation did not start until the end of the second world war.

The Conference that Reshaped the World

After the tumultuous period that was the first half of the 20th century, political leaders across the globe recognised that drastic measures must be taken to achieve some degree of global political stability and economic growth. These measures were formalised at the Bretton Woods conference in 1944 where the IMF, the IBRD (World Bank), and GATT were created. In conjunction with the invention of containerisation and communication satellites in the 1950s, these agreements and institutions kick-started the second wave of globalisation. As can be seen in figure 2, this wave was many magnitudes greater than the first wave in terms of the increase in the total value of global exports.

The IMF is an international financial institution that was formed with the goal of reducing poverty by fostering global economic growth and stability. Whilst some would dispute whether the IMF does in fact reduce poverty, overall it can be seen that this institution has been a key player in this second wave. The IMF facilitates global economic growth through three main activities: stabilising currency exchange rates, financing short-term balance-of-payments deficits of member countries, and providing advice and technical assistance to borrowing countries. These three activities are vital in supporting globalisation as they help to stabilise the international financial system and they indirectly encourage increased cooperation between member states.

The other key international financial institution that was a key driving force behind the second wave of globalisation was the World Bank. This international financial institution provides loans to countries for various infrastructure projects. Trade fundamentally relies on good infrastructure and therefore this funding by the World Bank can be seen to be one of the key factors in this rapid post-war growth. 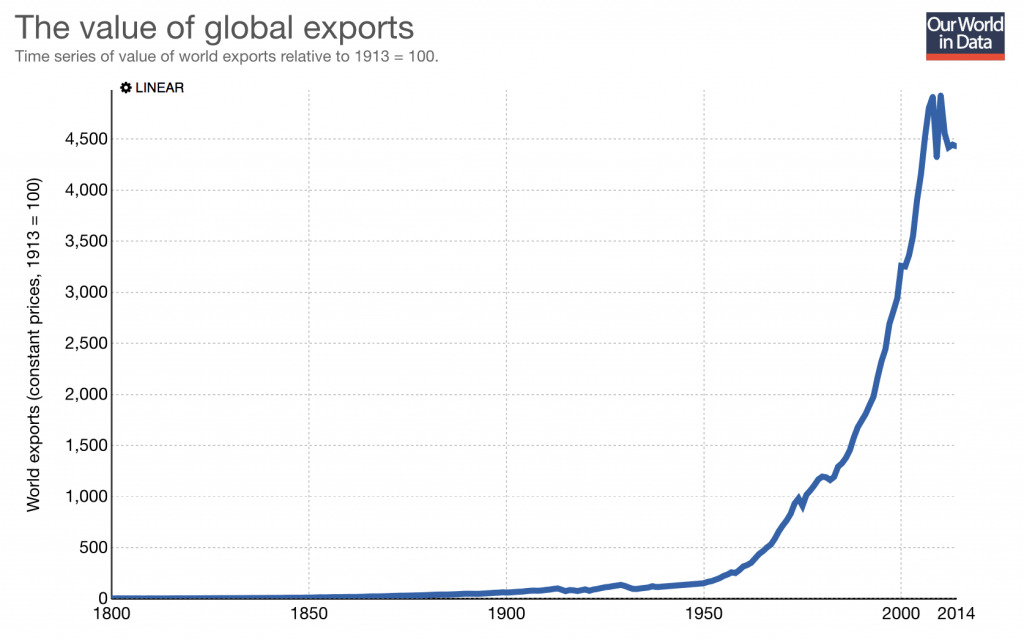 Despite its many criticisms, and its eventual transformation into the WTO in 1995, the General Agreements on Trade and Tariffs (GATT) that was signed by 23 member states at Bretton Woods must be recognised as a key driver in globalisation during this period. It was the only multilateral instrument governing international trade and it consisted of a series of trade rounds in which tariffs, quotas and subsidies were reduced to facilitate global economic integration. Substantial progress was made. For example, the 1956 second Geneva round achieved $2.5 billion in tariff reductions and the 1973 Tokyo round saw tariff reductions worth more than $300 billion.

For all its progress, GATT became burdened by an increased number of member states and by becoming over ambitious in its aims. The first round involved 23 countries, was solely focused on tariff reductions, and lasted for 7 months. By the final trade round (the 1986 Uruguay round) there were 123 member states, an excessively broad array of topics were discussed, and consequently it lasted for 87 months. This congestion that had built up necessitated the transition from a forum for discussion (GATT) to a proper international organisation (WTO).

Although the end of the second wave is less clear cut as the end of the first, and there are some who would argue that the second wave did not end until the 2000s, there is certainly a period of distinct political disruption that caused globalisation to falter. This can be seen in both figure 1 and 2 with a slight levelling off between the late 70s to around 1990. These political events include the oil crisis of the 70s and the deterioration in relations between the Soviet Union and the West due to the Soviet invasion of Afghanistan during the cold war.

Despite the distinction between the second and third waves not being overly clear, key political events that can be said to have facilitated the restarting of globalisation for the third wave are the fall of the Berlin Wall, the end of the Cold War and the formation of the WTO. Combined with the invention of the internet in 1990 and the beginning of widespread use of fibre-optic submarine cables in the late 1980s, these helped further integrate the global economy.

The fall of the Berlin Wall in 1989 signified the opening up of Europe and the start of increased cooperation within the region. The fall of the Soviet Union two years later and the resulting end to the Cold War were further changes that helped make way for a period of increased diplomacy that was beneficial to international business. This can be seen when looking at the net inflows of global FDI (figure 3). FDI requires a much higher degree of trust in both the political stability of the host country as well as in the strength of the relationship between home and host country. The much higher levels of FDI seen for this period can therefore partially be attributed to the end of the Cold War. 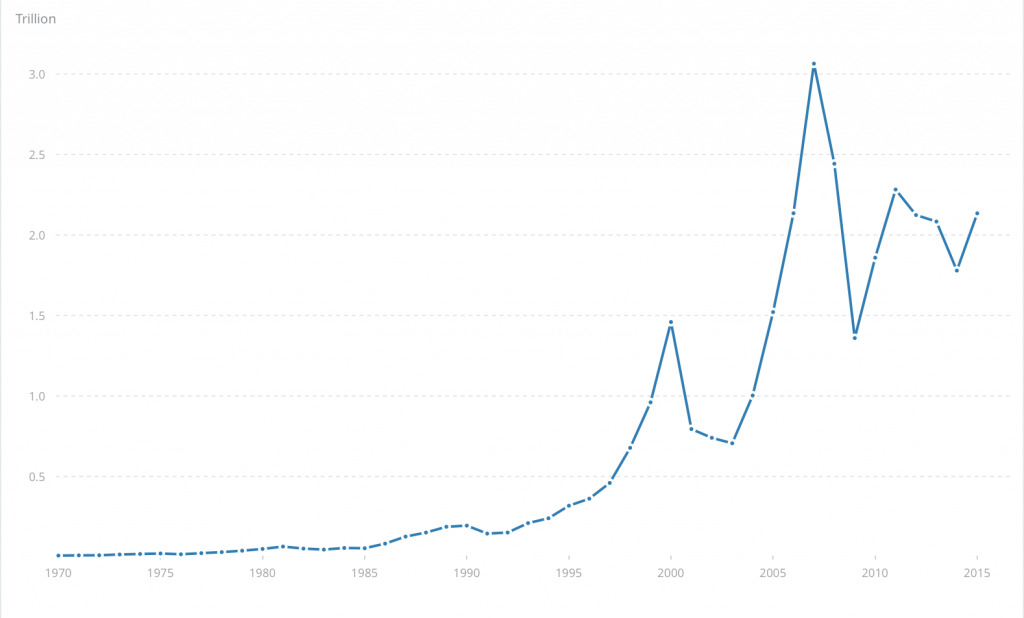