Rapeseed is the 3rd most produced oilseed complex in the world after palm and soybean. It’s an important production – 75mn tonnes of rapeseed are produced each year. But what’s… read more →

Rapeseed is the 3rd most produced oilseed complex in the world after palm and soybean. It’s an important production – 75mn tonnes of rapeseed are produced each year. But what’s happening in the market and where is it going? TFG investigates.

Canada, EU and Ukraine account for 2/3 of rapeseed production, although Canada might produce the most rapeseed – it’s shown exponential canola production growth from West Canada, where 90% of rapeseed produced is exported and sent to the US, China and many other countries each year. Ukraine and Russia are also significant players in the sunflower production, despite a tough year due to climate in the Black Sea last year.

Rapeseed is primarily used for vegetable (sunflower) oil, but also for biodiesel, a growing market. There are two biodiesel technologies, HVO (palm oil derivatives) and FAME (rapeseed derivatives), both growing markets driven by higher mandates; some 10% mix of fuels coming from biodiesel products is an EU target over the next 3 years. Rapeseed is the most significant biodiesel contributor, 2/3 of biodiesel comes from rapeseed in Europe.

Global diet in the last few years has changed rapidly. Vegetable oil consumption per capita has increased by around 20% globally in the past 17 years, in comparison to a flat global demand for proteins (e.g. meat).

Soybeans – the queen of commodities

In the US, you often hear the saying ‘corn is king’, with corn in the Eastern regions and Wheat in the West. Soybeans have grown to be the queen of commodities in the US over the last 10 years, driving commodity markets. With regards to oilseeds, soybeans dominate the sector in the US, with the ability to fix nitrogen in the soil and replace corn. 120mn tonnes, 90% of oilseed production in the US were produced last year. Globally soybeans represent 60% of total oilseed production globally, however soybean as a production of total growth is significantly higher, as a result of growth from South America. 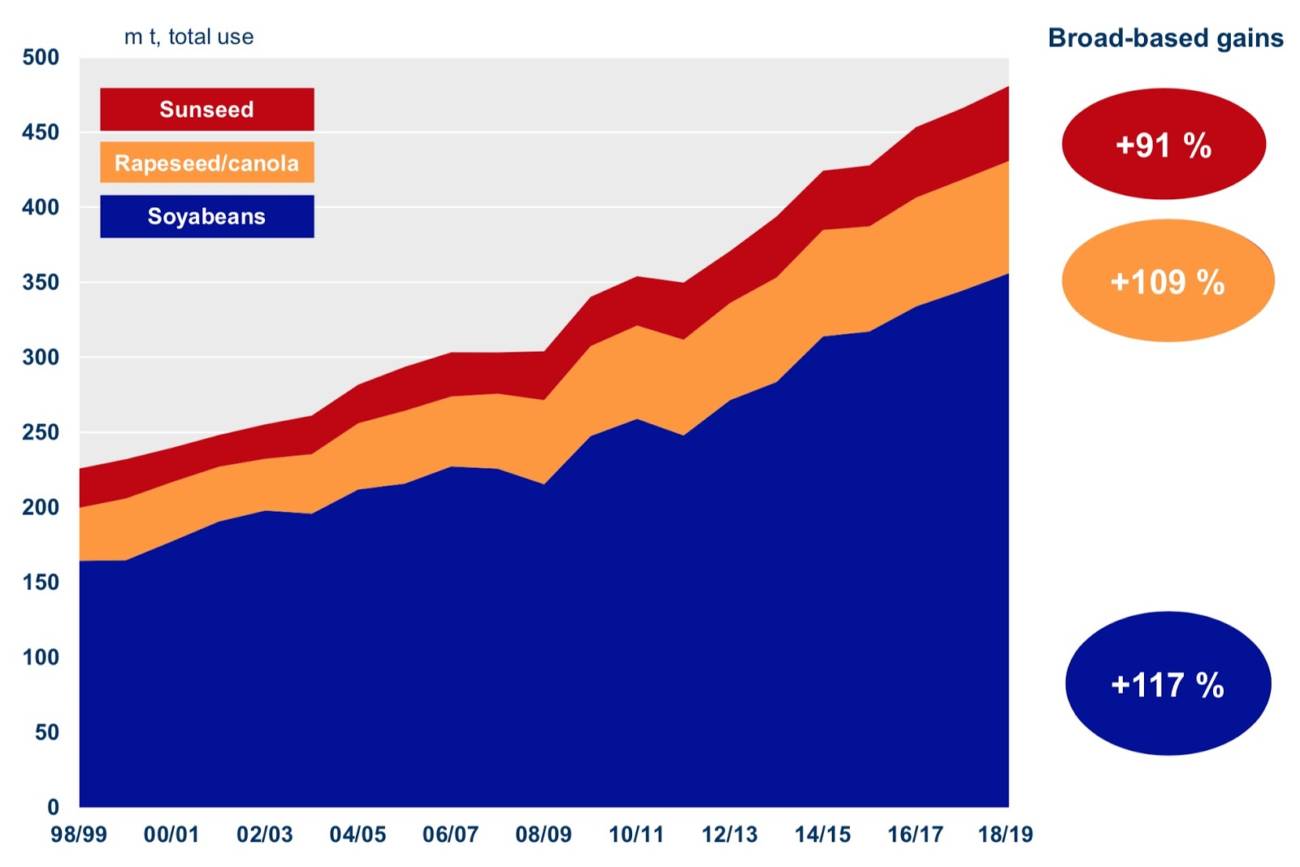 China as a consumer and importer of soybean has driven much of this growth, as well as biofuels.

Are oilseeds the principal driver in commodities?

Looking at trends in consumption of grains and oilseeds, 63% growth has been seen in the last 30 years, of which half of this attributed to the last 10 years alone. Consumption growth has remained predictable and consistent, and production has grown broadly in line with this trend. However, production to keep up with demand has been difficult, due to the economics and also weather conditions.

In the US, soybean production has been challenged by volatile weather and season trends, and acreage expansion is limited in the US. Growing populations also put pressure on farmland and pasture, and much of the growth and production needs to come from yield and productivity to meet local and global demand for soybean. The growth of soybean and corn has been seen at the expense of other crops; wheat production has declined by 50% in the last 10 years.

Corn leads the way in demand growth, with corn growing to 50% from 42% of total global grain consumption and soybean to 16% from 9%, in comparison to 30 years ago, whereas wheat consumption has declined. It’s predicted that soybean consumption will exceed 200mn tonnes in the next 12 years, according to the USDA.

Global meat consumption continues to rise, in Beef, Pork and Poultry. As a result of needing protein to grow protein, soybean helps provide feedstock for animals, given that aquaculture is not viable in many markets such as the US. Pork and poultry growth dominate meat consumption, both of which require more protein than beef, which drives demand for soybean feed to feed livestock which would be exported.

Further to this, the US has seen a rise in both biodiesel demand and also vegetable oil, as a result of demand and growing population. This, combined with a growth of pork and poultry consumption and therefore protein feeds, soybean has huge potential for continued growth over the next few years.

In summary, the stronger dynamics pushes prices to favour soybean causing an increasing acreage for planted crop. The export growth is the main driver for growth in the US caused by a growing global demand, particularly from China. In terms of use cases, feed demand are one of the ultimate drivers of soybean in the US and the world.