While electricity is produced and used at the same time, national electricity companies need to be able to satisfy demand at any given moment. By enhancing current interconnectors and building… read more → 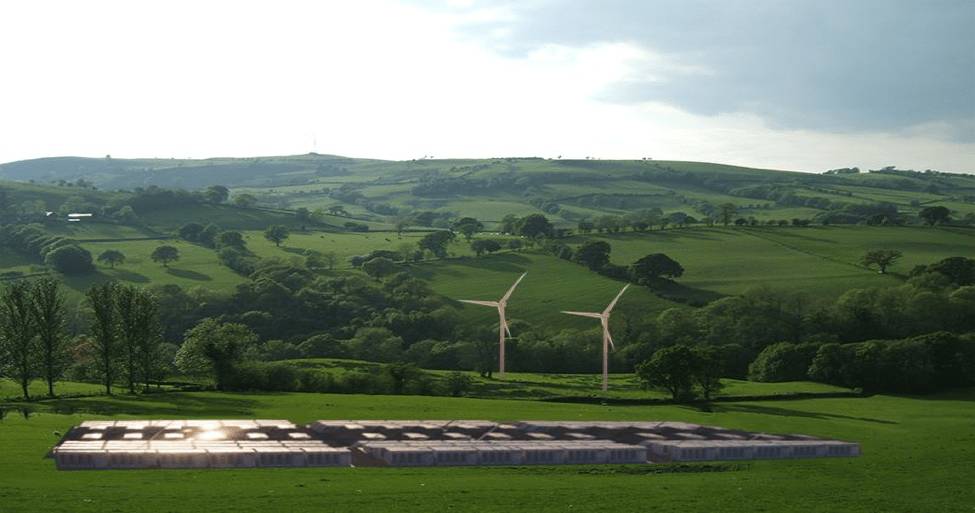 While electricity is produced and used at the same time, national electricity companies need to be able to satisfy demand at any given moment. By enhancing current interconnectors and building large grid-scale energy storage units, governments can mitigate any negative effects of the need for constant response power.

The peculiarities of electricity

For those who never grappled with the electricity market, this might be a surprising fact: electricity is a non-storable commodity. Whatever light-bulb is currently on in your room and even the electricity that aliments your computer, while reading this article, is produced at the very same moment that you are consuming it. Sadly, this also creates issues, since nobody wants to renounce on the late-night TV show or the Nespresso in the afternoon. As a consequence, “dirty” peaking plants need to be turned on so that each demand can be satisfied. Plants, that emit a lot of CO2 into the atmosphere, accelerating climate change.

Two ways can be considered to tackle the problem: either optimizing the current grid interconnectors in order to be able to transport the electricity where it is needed. Or, there should be investments in storage technologies, so that surplus electricity can be kept for later when there is not enough of it to satisfy demand.

In 2016, only 60 MW of storage capacity was available in the UK. When comparing to the daily load which fluctuates between 25 and 52GW –  constantly, this number seems meagre. In fact, it is far from being enough to make any significant changes, not only for renewable energies to store excess electricity, avoiding costly shutdowns of wind and solar farms, but also to provide a reliable response power for balancing the grid.

While the mechanical storage technology is the most mature of all, it is also the less convenient to build. The system pumps water into a reservoir when there is spare energy supply and liberates it whenever there is excess demand. The figure below provides an overview of the reaction time and capacity for the different types of storage. 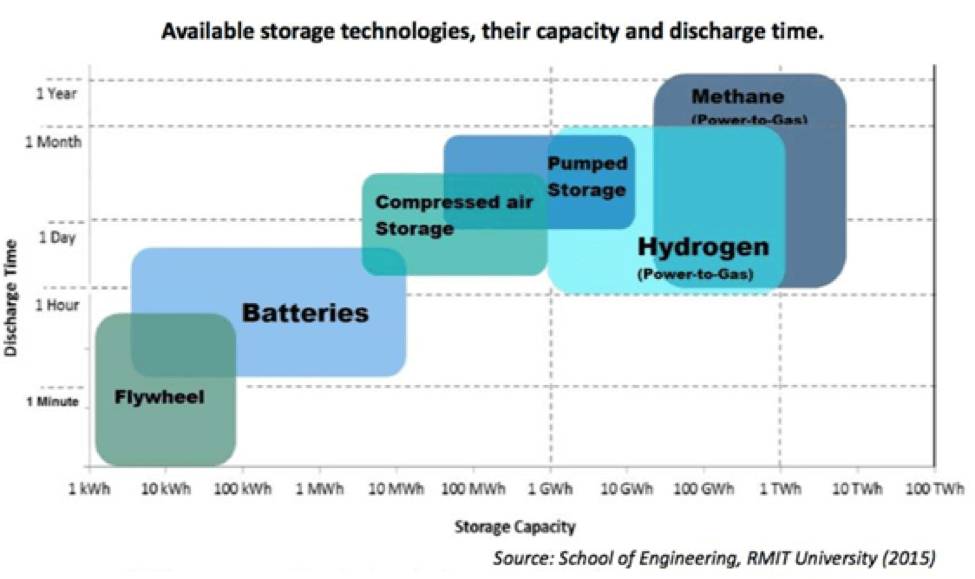 Yet, while a few years ago, Lithium-Ion batteries (LIB) were not reliable enough, the progress that has been driven by the automotive sector and smartphone building companies like Samsung have exponentially increased the capacity of such, making them more and more interesting for a use as large-scale storage units, overcoming the constraint of building large pumped hydro infrastructure and making storage available literally everywhere. Particularly, the discovering and implementing of new technologies, such as Graphene, will completely change the landscape of, not only the energy storage but also the energy sector as a whole, in the coming decades.

The most recent example is Tesla’s Elon Musk, who built a 100MW LIB in Australia in as short as 6 months. While Mr Musk is famous for risking costly investments into new technologies, more conservative investors can see it as a trend that will provide a safer investment in the future.

Bloomberg New Energy Finance released a report forecasting that the global battery storage market will “double six times” by 2030 to more than 300 gigawatt-hours and 125 gigawatts of capacity by then. This represents an estimated 103 billion USD of new investments over that period of time. 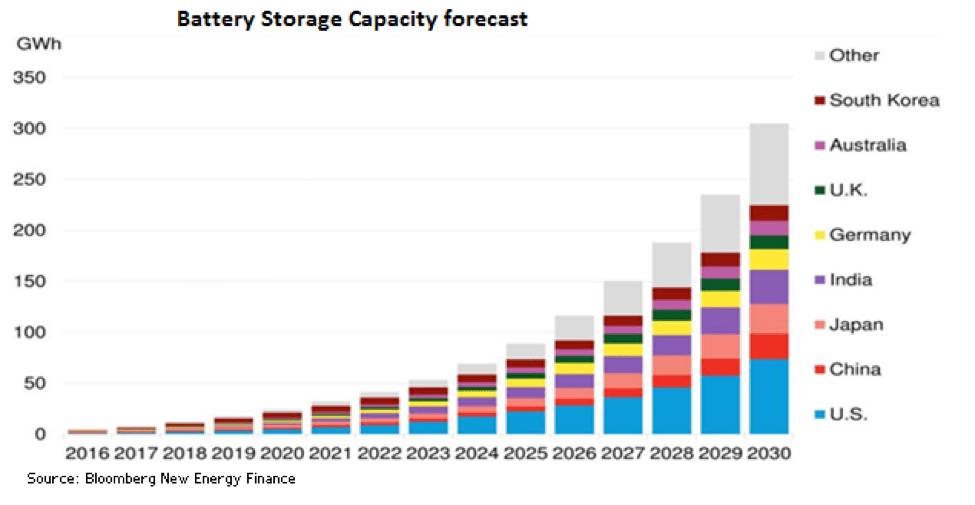 While electricity data, being highly accurate, would enable a precise future cash flow estimation, the main problem to arise is to convince banks – which are mostly cautious when investing into new and inexperienced fields – to finance the endeavour.

One way of approaching the issue could be to make use of project finance. Let us recall the main characteristics: Off-balance sheet financing, risk sharing and cash-flow related lending. Since all of it, like the renewable energies before, rely mostly on government support, by carefully negotiating contracts among all project participants, the risk can efficiently be shared among them. Making use, for example, of off-take agreements or other contractual agreements to guarantee long-term contracts. Further, as stated above, since cash-flows can accurately be forecasted, banks might be more willing to finance batteries, taking the assets (as a main part of capital expenditures) and future cash flows as collaterals. Further, having the storage units off the balance sheet, big investors – mostly large utility companies like Centrica or RWE – will most certainly be willing to invest as well.

The consequence, being an increase in competition, will not only decrease the marginal costs over time but also improve the quality (in form of capacity and longevity) of the used technology. All of it will make storage the game changer in the whole energy sector during the XXIst century. 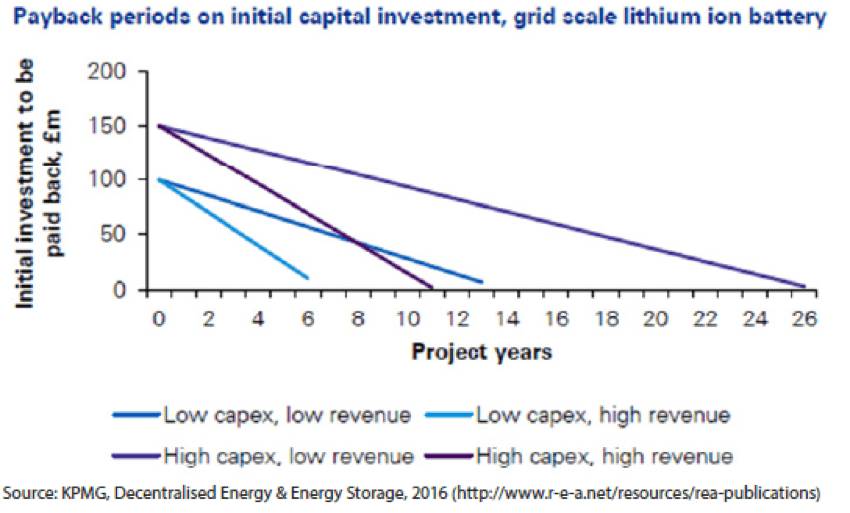 Through the fulfilment of these targets, the EU can help tackle climate change and air pollution, and simultaneously decrease its dependence on foreign fossil fuels, keeping energy affordable for consumers and businesses.” The framework established by the European Union, also known as the 2020 Energy Strategy, not only comprises investment into new technologies, but also an interconnected European electricity market.

While in some countries in the EU, due to oversupply the price of electricity can become negative, in others – at the same time – there can be a shortage of supply, with the consequence: a black-out.

A good example is the wind-rich energy supply in Germany and the UK, which are able to generate a large excess electricity during the night, and countries like Spain, who are pioneers of solar energy, generating a large excess during the day. Yet, currently, the interconnectors through the Pyrenees are not large enough to be able to balance the supply between the regions. While there is excess in one of the member states, there can be a shortage in another one.

See it like only a small road that connects London to its outside boroughs, traffic jams would be unavoidable. The same happens in the EU, where the infrastructure is still not modern enough to connect all the different supply poles with the large demand areas. 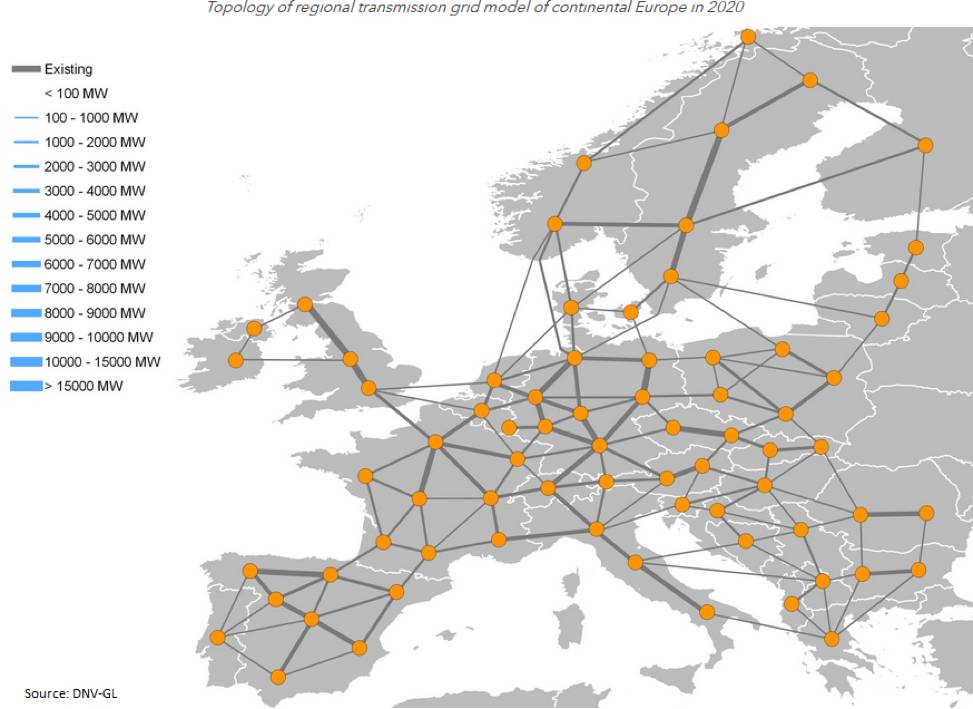 While the expansion of the grid is costly, the use of BOT (Build-operate-transfer) models could create incentives for the large European utility companies to make the necessary investments. Again, the governments could stimulate the economy by creating contracts for privates to build and operate grid extension projects. After enabling investors to make their investments profitable, the EU could in such cases still keep the monopoly over the domestic energy transmission, making it a win-win situation for every participant.

Not only is a full switch towards renewable energy a way to provide affordable, independent and sustainable energy, in the long run, it might also be a way to mitigate the negative effects of climate change. And who knows, maybe there is still a chance that glaciers in Europe still exist at the end of the century.

While there is also a discussion about demand-side management through smart grids, it is a combination of all technologies that will make a zero-emission future possible.

So far, while the framework for renewable energy is changing quickly, there is withal a need for the government to provide incentives for private companies, since the investments required are high and not (yet) always profitable.

Governments and investor have all the cards in the hand to build a zero-emission electricity generation in Europe. Now, it’s a matter of playing the right ones.