The tradition versus technology debate in letters of credit

Digitalising these documents may seem like a bridge too far for some banks, but the risks of not investing in these technologies are comparatively greater.

The pandemic only accelerated digitalisation, which had already been creeping forward in our industry over recent years. Some see the move to digital trade finance as opening Pandora’s Box, and ask: will this change lead to inefficiencies, and will there be unexpected risks to deal with? Others see the process as letting the genie out of the bottle, and believe the advantages will quickly become apparent.

Letters of credit are an important instrument of traditional trade finance. They are characterised by a heavily manual and paper-based process, which can be an expensive outlay for corporates.

In a recent survey conducted by Finastra, 83 percent of banks that we asked said that letters of credit were ready for change. This is because, while they provide supreme confidence and low levels of failure for banks and businesses, they are expensive and cumbersome instruments.

Initially, the key issue that banks faced during the pandemic, was that corporate clients and bank operations staff had to work remotely. Familiar practices of moving paper around, and customers walking into branches were met with barriers. Banks had to adapt and move some importance away from paper-based documents, and digitalise these processes.

The other adaptation was the drive for corporates to move towards using digital channels as a way of communicating with banks. We have seen the growth of multi-bank platforms such as Marco Polo and Contour – the latter of which has seen a 60 percent increase in business.

Lastly, out of necessity, banks have acted like couriers where there was an absolute need to move physical paper. They have been helping customers to understand where to send physical paper documents, how to do this quickly, and how to move paper between institutions as well.

In the past, the manual intervention and physical movement of paper has led to letters of credit remaining relatively expensive. Trade finance suffers from an inertia which has blocked a digital revolution. But the recent necessity to alter these manual processes has lifted the curtain on some of the mysteries of trade finance; paving the way for change.

The benefits of digitising trade revolve not only around reducing cost, but also increasing efficiencies, reducing time taken to implement trade and, crucially, increasing the availability of trade finance.

“Trade finance suffers from an inertia which has blocked a digital revolution.”

Regional banks will be able to utilise letters of credit more easily, too, and expand upon their own business due to the increased availability of technology which can help with their operational efficiencies.

In our recent survey, banks told us that they were waiting to see what the industry did before investing in these changes. There were also some concerns from banks about their expertise surrounding the digitalisation of letters of credit. Of course, this is rapidly changing in response to the recent pandemic.

However, the technology is mature enough and there are a number of secure solutions in the market already. The main blor is an inertia in the banking world to adopt this new technology.

There are always some risks involved when you implement a new tool, process, or piece of technology. Whether that investment will prove to be effective is always the question.

But what are the risks of not investing and continuing to move paper manually? Comparatively, they are huge.

What needs to happen to implement digital letters of credit?

Digitising the documents that make up trade finance is, of course, crucial. 80 percent of people looking into digitalising trade would put the bill of lading as the most important instrument to digitise. There are other important documents as well; promissory notes and bills of exchange, to name a couple.

As documents are digitised and standards are built up, the compliance assuredness will follow in line with the build up of best practices. DSI is one of the front-runners in terms of standardising the data between parties and jurisdictions which are involved in the letters of credit process.

Across different countries, different governments are working at varying speeds to help with the regulation and digitisation of documents for trade finance. However, the trend shows an increase in the support for digital trade from governments and steps being taken towards regulatory change.

PODCAST | Faces of trade: the people behind the policies 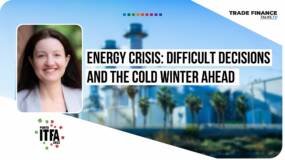 VIDEO | Energy crisis: difficult decisions and the cold winter ahead

PODCAST | Faces of trade: the people behind the policies