The Potential Impact of Brexit on International Tax Competition: A UK and EU Perspective 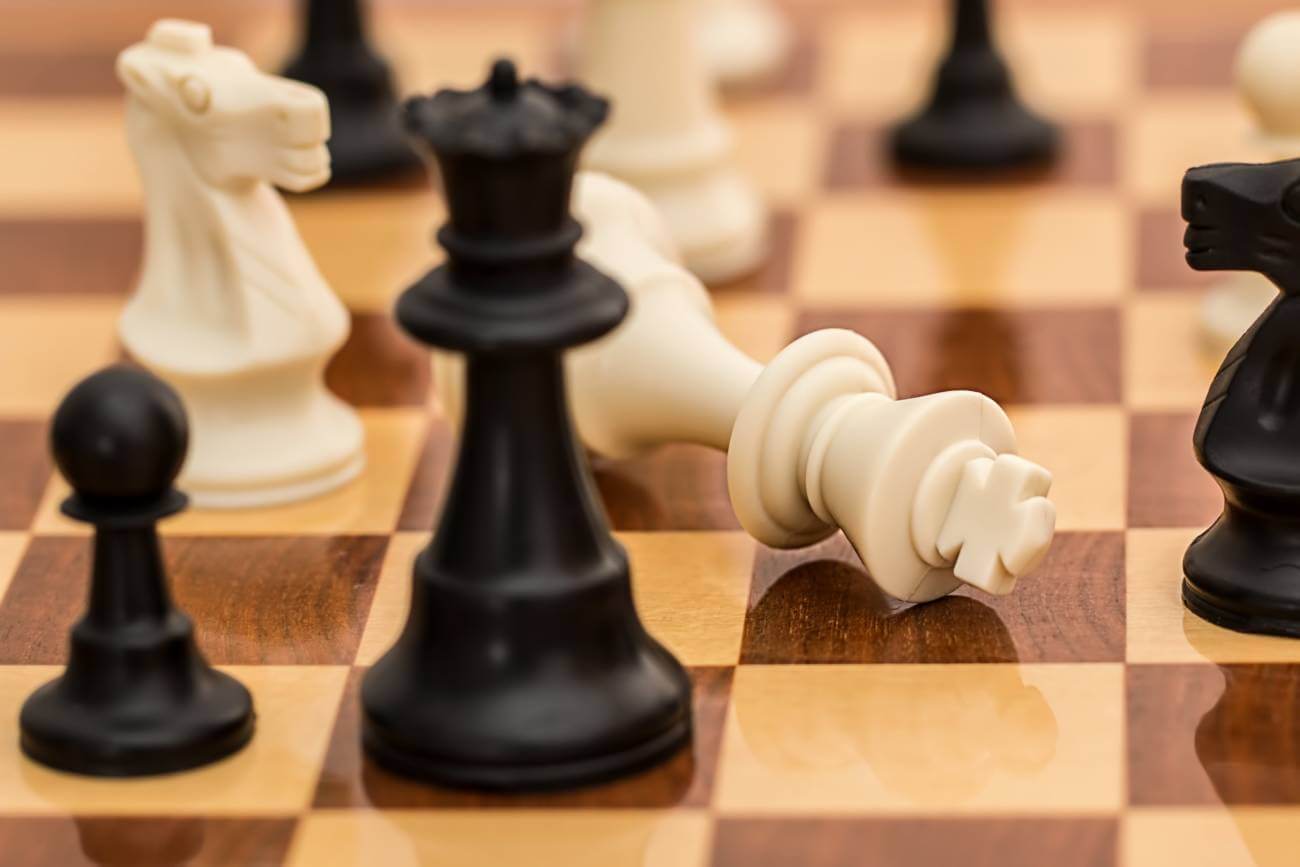 ITC decreases tax revenues, public spending, and welfare; hence the European Union (EU) introduced various ITC limiting initiatives. However, on June 23rd 2016, the United Kingdom (UK) voted for Brexit; withdrawal from the EU. Brexit may break-down the initiatives that limit UK-EU ITC, sparking a new round of ITC. Varied perspectives exist regarding the potential impact of Brexit on ITC; this article considers such positions to conclude an overall judgement.

The Development of ITC and CTR Coordination 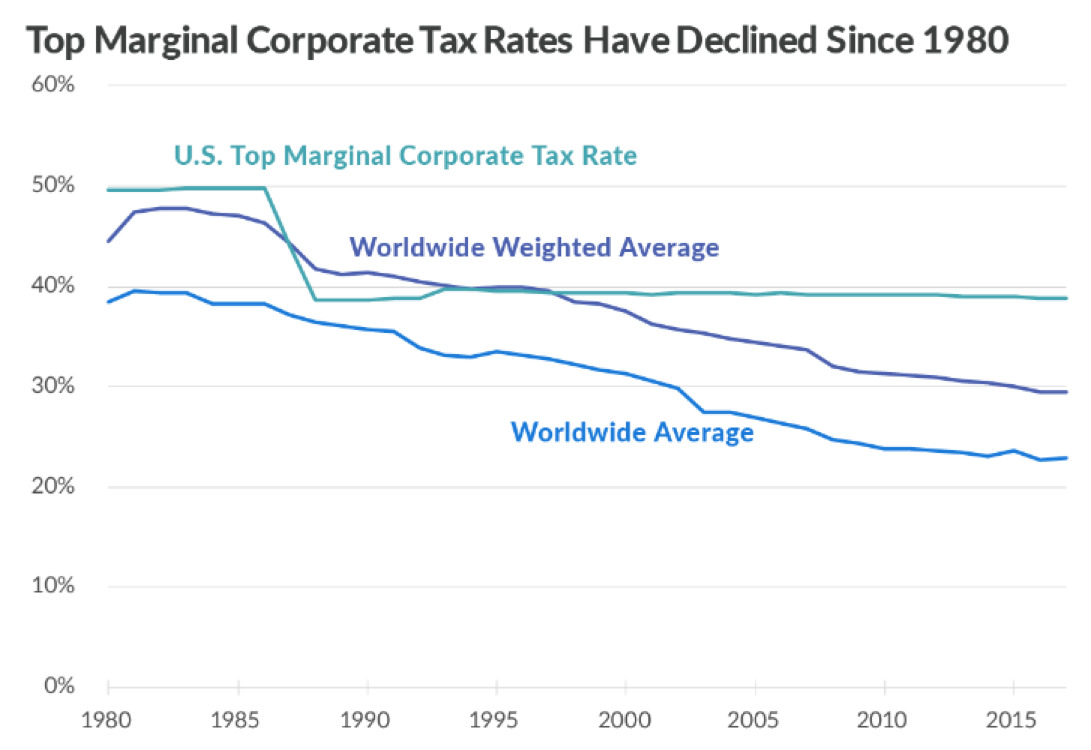 ITC causes inefficiently low CTRs, erodes tax revenue, public spending, and welfare (Zodrow, 2003). To limit ITC between Member States, the EU introduced initiatives, including the 1997 Code of Conduct, the 2003 EU Savings Directive, and the Common Consolidated Corporate Tax Base (European Commission A; European Commission B). Although such initiatives’ success is debatable, the EU remains the only international organisation tackling ITC with some degree of success (Haupt, 2017).

If post-Brexit agreements replicate current EU free-trade agreements, ITC will not occur. However, with an uncertain post-Brexit UK-EU trade deal, Brexit potentially breaks down the EU initiatives that limit ITC, sparking a new round of UK-EU ITC (Trade Finance Global, 2016).

One perspective is that Brexit will harm FDI attractiveness for the UK, reducing capital inflows, economic growth, and citizen welfare (Brakman et al, 2017).

EU membership increases a country’s FDI by a 28% average; in 2015, approximately 45% of UK’s £1 trillion FDI originated from the EU, with FDI creating 75,000 jobs between 2016-2017. The UK’s most important export market is the EU single market. Supposing a UK-EU post-Brexit trade deal fails to replicate current free-trade agreements, and the UK no longer has access to the single market, estimates suggest Brexit could reduce the UK’s £1 trillion FDI stock by 22% (Osborne, 2016). This may result from several factors:

The negative economic impact of decreased UK FDI can be analysed through an adaptation of the ZMW model.

The UK and EU Capital Allocation 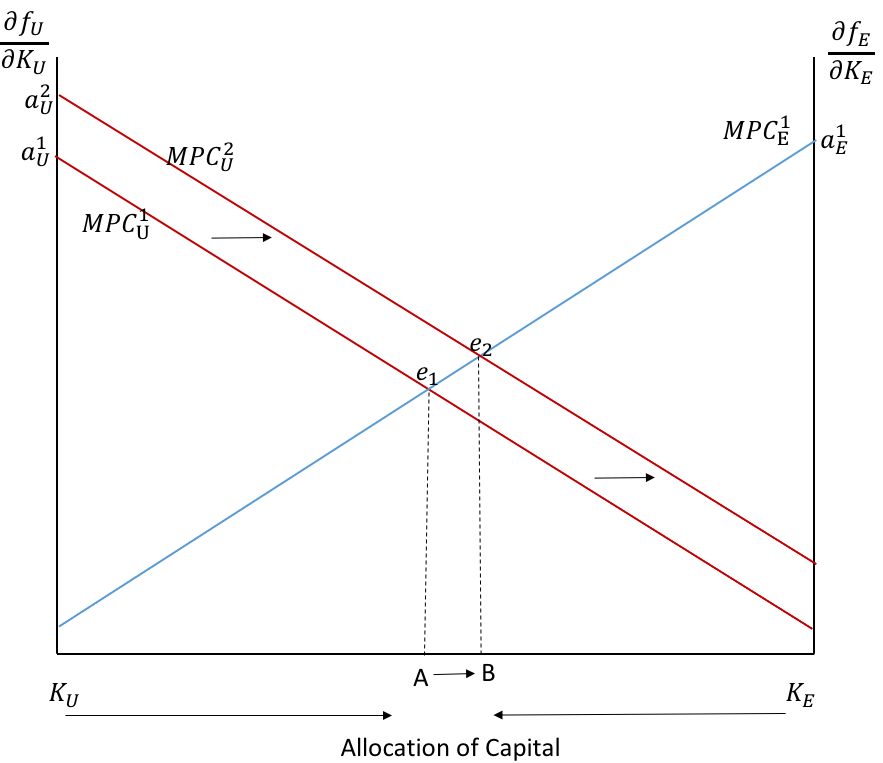 Reduction of FDI into the UK and International Tax Competition Initiation

The impact of reduced UK CTRs can be analysed through UK and EU best response functions, BU1tE and BE1(tU) respectively, which show the optimal UK CTR for a given EU CTR. 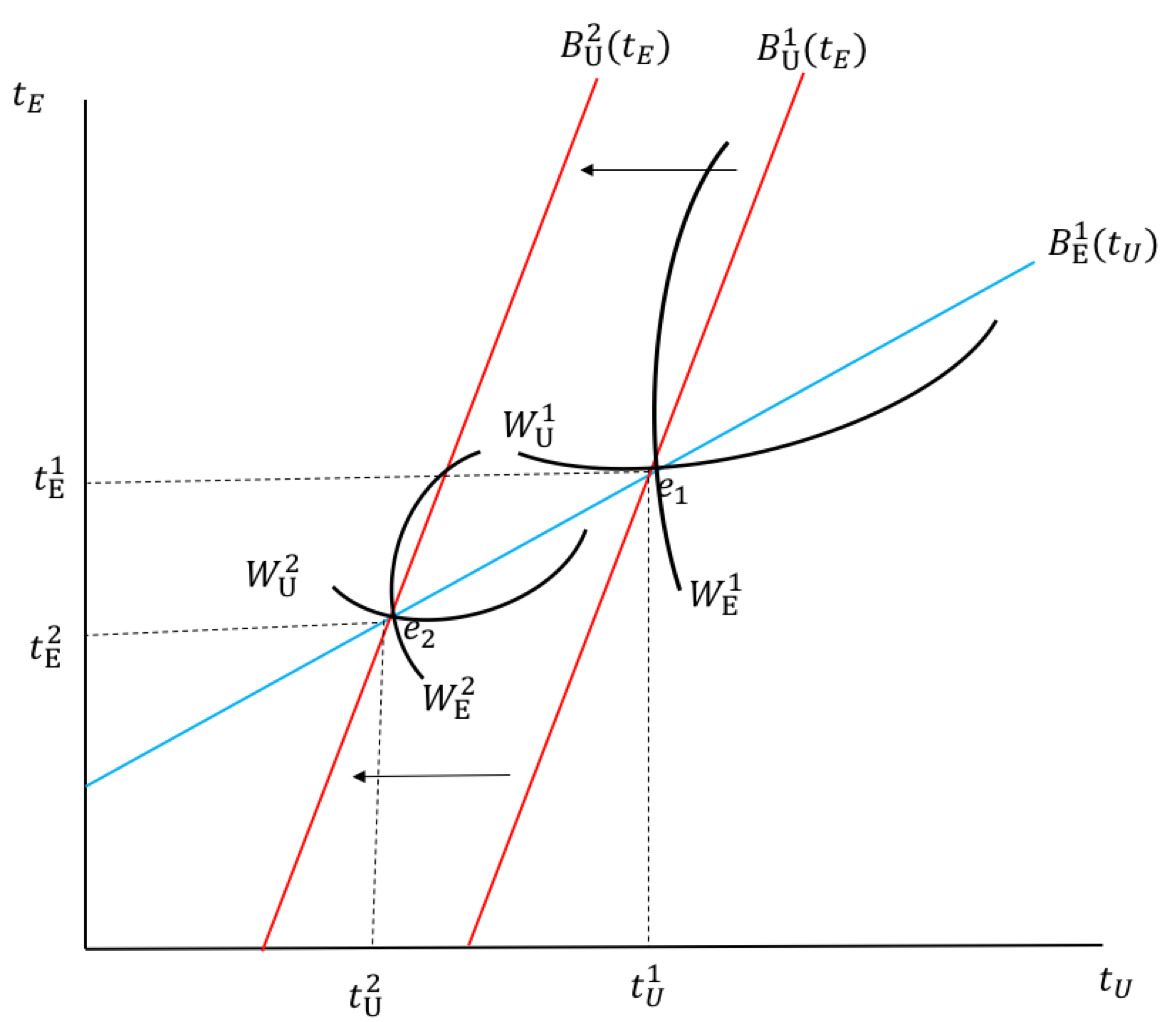 The intersection of BU1tE and BE1(tU) and their respective iso-welfare curves at e1 is the pre-Brexit Nash equilibrium (NE) – demonstrating the welfare maximising CTR for each country given the CTR of the other, hence neither country wishes to deviate from e1 (Keen and Konrad, 2012).

To reduce UK CTRs, the UK’s BRF curve shifts left to BU2tE in Figure 3. The equilibrium shifts to e2, and optimal UK CTRs decline to tU2. As UK and EU CTRs are strategic complements, decreased UK CTRs ignites ITC and hence the EU also decreases their CTR to tE2. Consequently, new iso-welfare curves (WU2 and WE2) intersect BU2tE and BE1tU and at e2.

As  WU2 and WE2 are closer to the origin, UK and EU welfare at e2 is reduced compared to e1, as decreased CTR reduces tax receipts, leading to suboptimal levels of public spending and citizen welfare – the implications of ITC initiation (Mitu, 2009).

To increase tax receipts, the UK government may introduce a preferential tax regime, implementing lower CTRs for multinational companies, attracting FDI, whilst higher CTRs for immobile domestic small and medium enterprises (SMEs), who face difficulty evading tax or relocating (Mitu, 2009). Yet, this regime may negatively impact regions more than others, including the heavily SME dominated South-West.

There exists the alternative opinion that Brexit may benefit the UK. The removal of EU directives and tax incentive restrictions may turn the UK into a ‘tax haven’, increasing FDI attractiveness.

This increases the UK’s MPC, shifting their MPC curve right to MPCU2 in Figure 4 below. The equilibrium consequently shifts to e2, and capital allocation shifts from point A to B: capital in the UK (FDI) increases, whilst capital in the EU decreases.

The UK and EU Capital Allocation 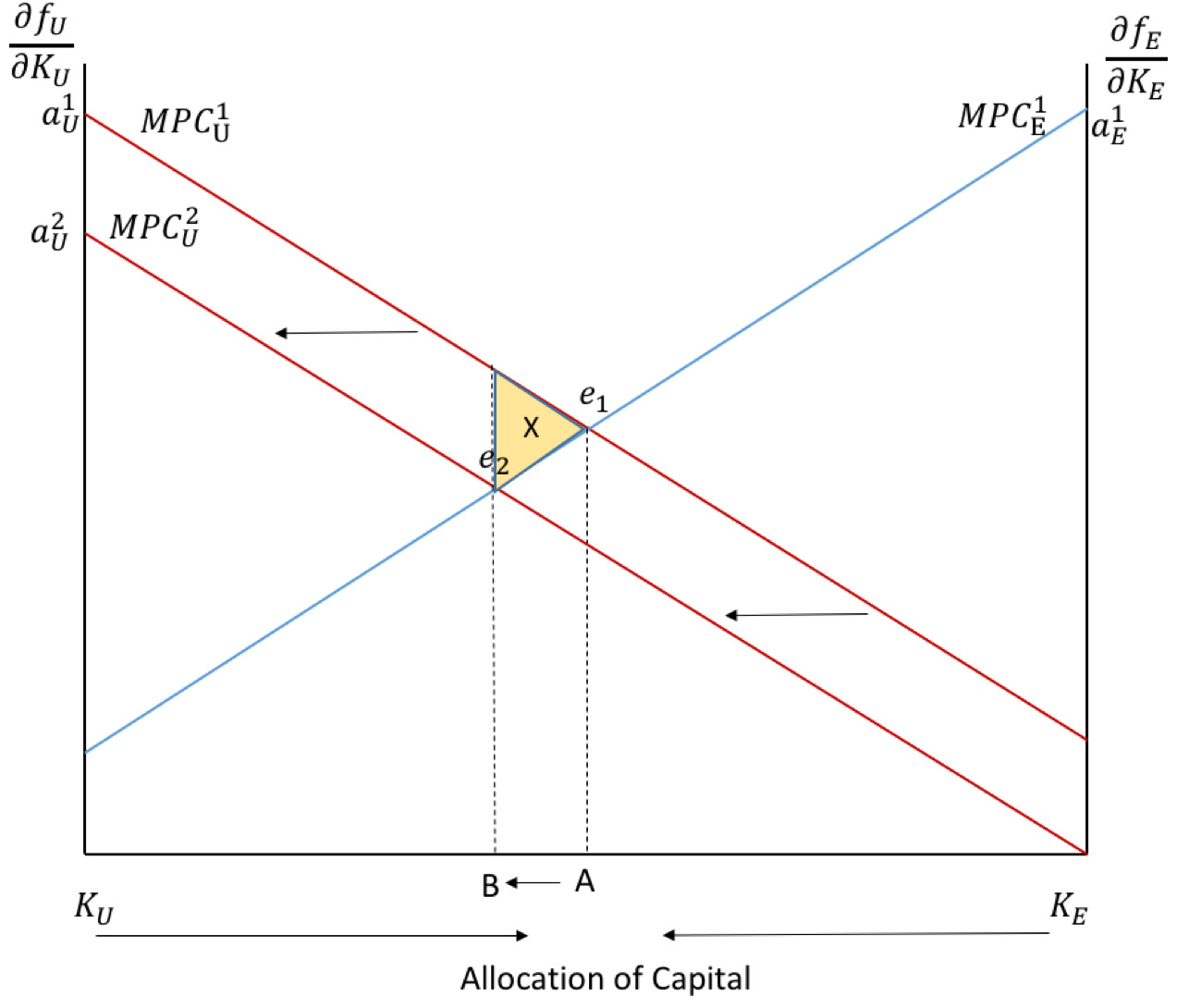 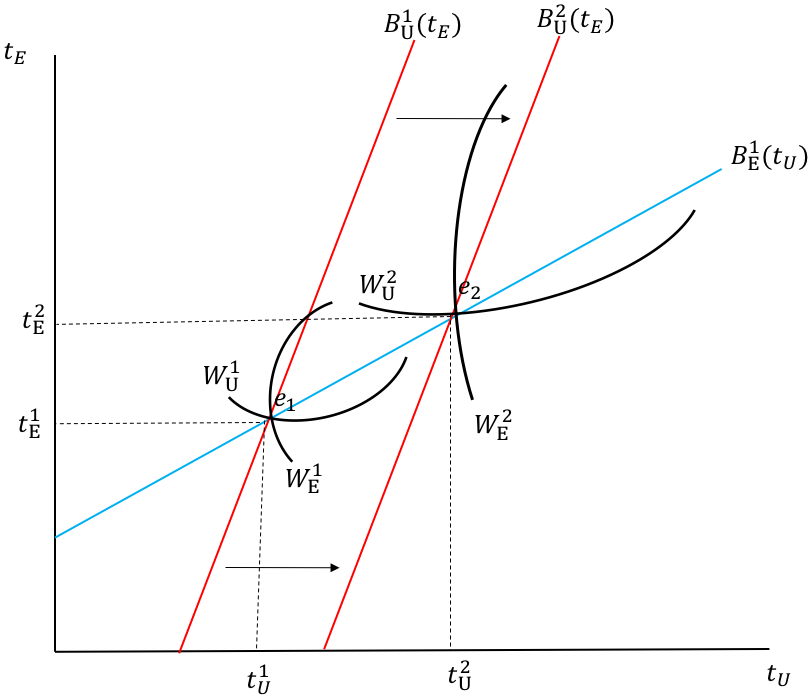 The equilibrium shifts to e2, UK CTRs increase to tU2, increasing EU CTRs to tE2; ITC is not triggered. New iso-welfare curves, WU2 and WE2, intersect the BRF curves at e2. WU2 and WE2 are further from the origin: increased CTRs boost tax revenues and government spending, raising UK and EU welfare (Zodrow, 2003).

However, given previous analysis and the EU single market benefits, if the post-Brexit trade deal between the UK and EU fails to replicate current free trade agreements, economic theory suggests Brexit will more likely harm the UK, through triggering ITC, than be beneficial.

Potential Impact of Brexit on the Remaining EU

The resulting non-cooperative post-Brexit NE, e2, in Figure 3 is not Pareto efficient. A Prisoners Dilemma exists as a Pareto improvement is attainable with cooperative tax coordination, moving to either CTR tU1 and tE1, or to a rate within the lens created by WU1 and WE1 (Figure 3). Cooperation increases CTRs, tax revenues, and welfare, assuming governments want to maximise citizen welfare, as the iso-welfare curves are further from the origin (Zodrow, 2003). Consequently, economic integration (trade agreements and CTR coordination) should remain at their current level post-Brexit, preventing ITC initiation, safeguarding UK-EU competitiveness and citizen welfare.

The impact of Brexit on ITC depends on post-Brexit UK-EU trade agreements, and how this shapes UK and EU FDI attractiveness. This article analysis reveals that given the removal of current free-trade agreements, Brexit is more likely to harm attractiveness of FDI into the UK, triggering ITC. Owing to the resulting UK-EU tax receipt and overall welfare reduction, prevention of stimulating an ITC race to the bottom is socially optimal, and hence a suitable recommendation is to implement the same UK-EU level of economic integration post-Brexit.

Lori is a final year BSc Economics student, with a particular interest in economic development research and econometrics.