As we predicted, exporting is on the rise off the back of a weakening pound since June 2016. Recent figures from the Office for National Statistics (ONS) have reported a… read more →

As we predicted, exporting is on the rise off the back of a weakening pound since June 2016.

Recent figures from the Office for National Statistics (ONS) have reported a £4.2bn trade deficit, up £2.6bn since October.

What is a trade deficit?

What caused the increasing gap in trade? 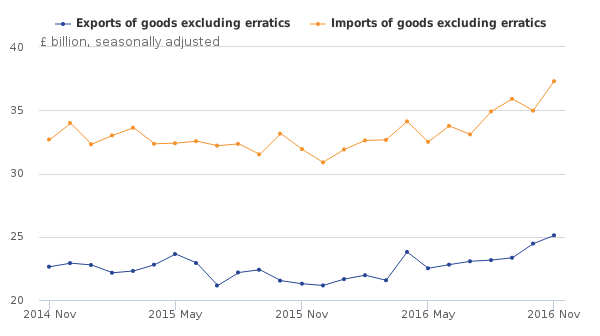 The recent data is a mixed bag of results. On one hand, the construction industry showed signs of contraction, by around 0.2%, whilst industrial output (i.e., manufacturing) rose 2.1%, caused by the return of production of a North Sea oilfield and an increase in pharmaceutical orders. Analysts were predicting just a 1% growth in industrial production.

The UK deficit on trade in goods and services was increased to £4.2bn. The exports of machinery and transport equipment and unspecified goods (including non-monetary gold) also increased, but increases in imports of goods (particularly of fuels and material manufactures) led to a widening of the trade in goods deficit during this period.

Which countries did the UK trade with the most?

The UK exported the most to the USA in Novembr 2016, an increase of £4.5bn, whilst Germany was the top import partner, which imported £6bn (+£0.5bn) in the same month.

What about the price of the pound?

Following the EU referendum in June, the pound’s value plummeted nearly 20% versus the US dollar and euro. This has seen a slight increase in value, particularly in November 2016, although year on year, it’s -17.9% weaker than November 2015.

As a result, export prices fell by around 1.9%, and import prices dropped by 1%. The rally in the pound would have meant the costs of importing from October decreased.

What does this mean for businesses?

It is clear that businesses are facing a volatile journey, particularly those that are importing or exporting internationally. Exports rose in November, but imports rose even more, widening the trade deficit, but highlighting a positive swing in the economy.