Bears Have Come For The Yuan

Due to China’s weakening economy, relative Yuan overvaluation, strength of the American Dollar, and trade-war with the USA, the Yuan is likely to depreciate against the Greenback in the near-to-medium… read more → 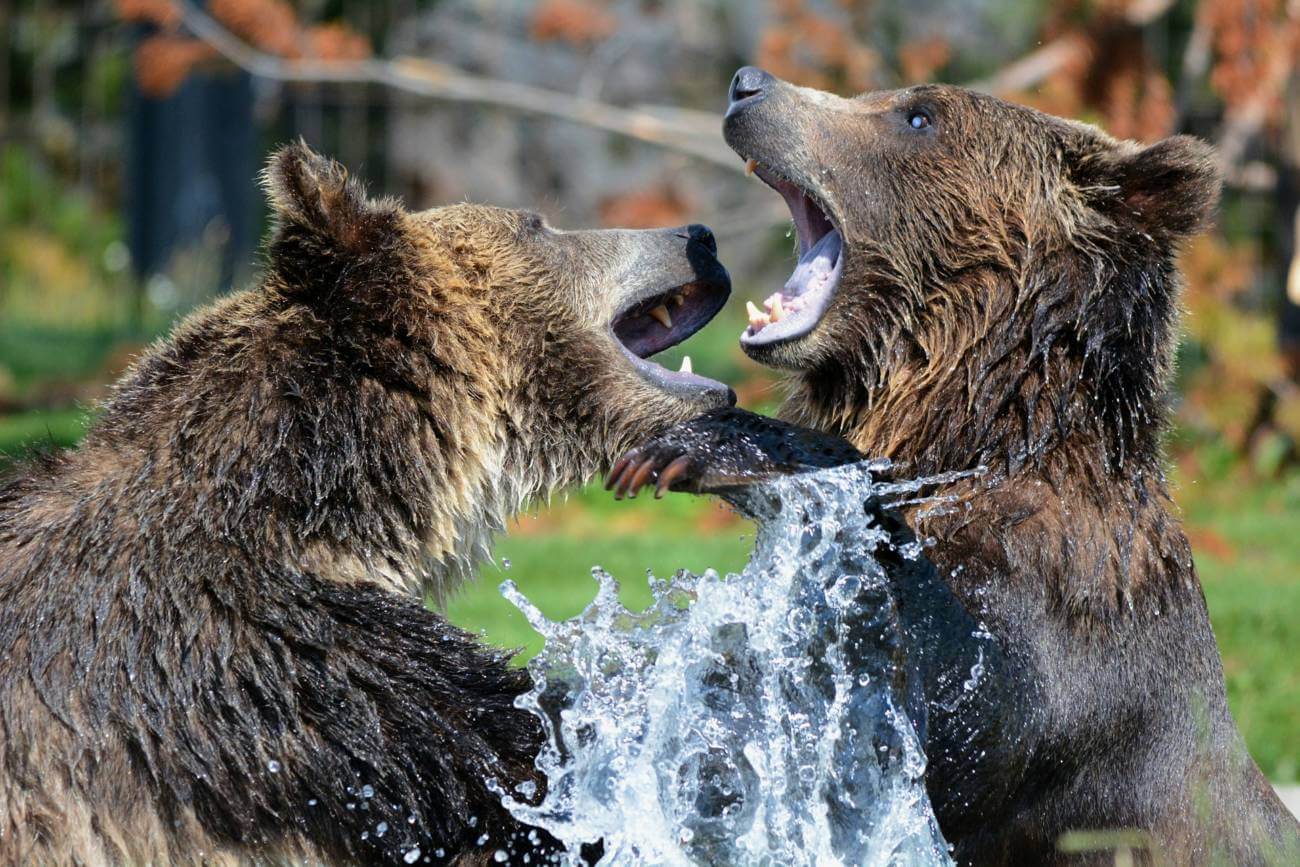 Due to China’s weakening economy, relative Yuan overvaluation, strength of the American Dollar, and trade-war with the USA, the Yuan is likely to depreciate against the Greenback in the near-to-medium term.

With the escalation of trade tensions on one hand, and China’s slowdown in economic growth on the other, it comes to no surprise that the People’s Bank of China (PBOC) kept short-term interest rates unchanged despite the Fed rate hike. This decision portends China’s move towards further monetary easing measures. Reinforced by the strength of the US economy and the Dollar, the Yuan is likely to depreciate against the Greenback over the near-to-medium term.

The Unavoidable Depreciation of the Yuan

China posted shockingly weak economic data for May indicating the worst investment growth in the past 22 years. In particular, 2018 Q1 fixed-asset investment (FAI) growth expanded 6.1% Year-on-Year (YoY) against an estimated 7%, the worst data since February 1996. Industrial output grew 6.8% YoY against a forecasted 7%, while retail sales rose a mere 8.5% YoY versus a 9.6% projection. The performance of these key economic indicators signals a softening of the Chinese economy. Spurred on by China’s deleveraging campaign and crackdown on shadow banking and pollution, the apparent cyclical moderation and threat of a credit crunch provided ample justification for the PBOC’s decision to hold rates despite the Federal Reserve’s increase in the benchmark interest rate by a quarter percentage point to 1.75% to 2%. 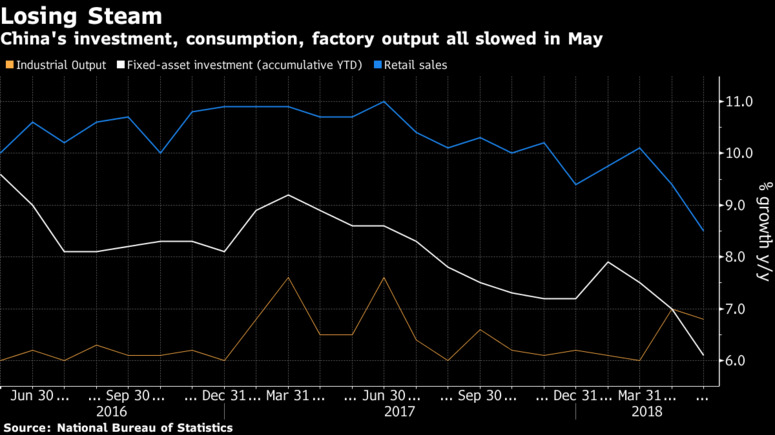 The PBOC’s decision to keep rates unchanged is indicative of its recognition of China’s intrinsic structural problems, the commencement of a slew of monetary easing policies, and the trigger of Yuan weakness. In the coming  months, we are likely to see:

Even with the recent sell-off, the Renminbi (RMB) remains 5% up against the Dollar over the past year. According to the Bank for International Settlements (BIS), the RMB’s Real Effective Exchange Rate (REER) Index has appreciated more than any other major currency since 2010. Given the disparity between the overly-optimistic growth expectations priced into the Yuan against China’s actual economic data, there exists room for the currency to depreciate. Bloomberg Economics’ Fair Value Estimates further corroborates the overpricing of the Yuan, with its Fair Value REER at 115.60 against the BIS REER of 126.24, as of June 2018.

Segmentation of the Global Business Cycle

With the US experiencing a mid-stage bull market, while China moves towards a late-stage bull, downward pressures on the Yuan are also further exacerbated. Based on current economic data, it is evident that the US economy is still gaining momentum, while the Chinese economy is losing steam. While the Fed implements monetary contraction, the PBOC is introducing easing, leading to monetary policy divergence and the narrowing of the Sino-US interest rate differential.

The strength of the American economy and the trajectory of subsequent rate hikes in 2018, 2019 and possibly even 2020, coupled with a sustained weakening in China’s economic growth, implementation of domestic easing policies, and the relative overpricing of Yuan, have laid the foundation for depreciation in the currency.

Going Nuclear: Is devaluation on the cards?

The escalation of the trade-war between China and the USA is the catalyst of the Yuan’s current depreciation. With the underlying factors paving the way for Yuan weakness, USA’s Section 301 Tariffs and China’s retaliatory action represent the tipping point that set the Yuan on its course of depreciation. If Trump follows through on his threat of tariffs on US$200 billion Chinese imports and import finance, this will definitely incur retaliation from Beijing. But how far can China hit back at the USA?

The answer is not very far. China suffers from limited US exports to target; US imports from China comprise US$ 524 billion, compared to the US$ 187 billion US exports to China. This has led analysts to speculate about the potential weaponisation of the Yuan in trade negotiations.

Indeed, a one-off Yuan devaluation would help offset the impact of US tariffs by making Chinese exports more competitive. But an active devaluation of the Yuan is a double-edged sword, and Beijing might face the sharper end. Drawbacks to China include:

Given its ramifications, China is unlikely to actively accelerate the market-driven depreciation of its currency. They would have learnt from their painful mistake in the 2015 Yuan devaluation, in which the PBOC spent more than US$1 trillion in reserves to contain. Instead, the PBOC will facilitate a gradual, natural depreciation of the Yuan against the Dollar, given the existing capital controls and its US$3 trillion foreign reserves. This is motivated by a softening economic climate, Sino-US monetary policy divergence, relative overpricing of the Yuan, and the implications of the trade conflict with the USA.

Of course, China’s Balance of Payments (BOP) remains an important piece of the puzzle. On one hand, China’s Foreign Direct Investment (FDI) is record high, and capital inflows from index inclusion are optimistic. On the other, China’s international BOP position is worsening, and will only continue to deteriorate as the USA pressures China to narrow the bilateral trade gap.

But what does China want? It wants a weaker Yuan without increased capital outflows. Thus, given the current economic climate, China will not fight against a trend of gradual depreciation, but use it to its advantage, by welcoming and facilitating it without actually influencing it. As long as China does not do anything to actively devalue the Yuan, and the depreciation is natural and gradual, outflows will be relatively muted, as expectations for a devaluation of the Yuan by the PBOC will be small, and investors will still take the long-term view of China’s continued economic growth.

China, would, however, ensure that the pace of depreciation is gradual, and in line with what it deems to be ideal. Instead of aiming to keep the Yuan above a certain price, the PBOC would likely step-in to ease the rate of depreciation. China has its eye on the bigger picture: A currency truly determined by market forces, in a bid to boost foreign participation in the domestic equity and bond markets, and internalisation of the Yuan.

This is an opportunity for China to have the cake and eat it too. Even if something as drastic as Treasury Secretary Mnuchin announcing he will travel to China to ease trade tensions does suddenly happen, the Chinese government need simply react and accommodate to this change. But until that happens, China would just have to make the best out of their current situation.

The trade conflict is unlikely to be resolved in the medium term, with China and USA vying to be the global hegemon. Both endowed with strongmen governments, backing off will signify political weakness. Trade tensions will remain looming over the markets, and though we may experience brief instances of respite in the months ahead, any Yuan recovery will be but short-lived.

What can companies do?

It would be wise for entities with significant Yuan exposure to hedge their currency risk through a combination of forwards, options, and swaps that matches their risk profile and preferences. Moreover, Yuan depreciation will likely have a spillover effect on Emerging Asian economies, so it is important to manage those currency risks as well.

Shawn Chow is passionate about the intricate nature of the FX market. He is currently interning at Nomura as a Global Markets Summer Analyst, specialising in FX Structuring. He has prior experience in Asset Management, Private Equity, Venture Capital, Renewables, and FinTech.