For trade and receivables related financings, 2018 was a year of volatility and unexpected happenings. From the explosion of digitalisation and sweeping regulatory changes to the introduction of non-bank finance… read more →

For trade and receivables related financings, 2018 was a year of volatility and unexpected happenings. From the explosion of digitalisation and sweeping regulatory changes to the introduction of non-bank finance in the mid-cap space, 2018 was eventful. We took a look at the top commercial finance trends of 2018.

2018 marked a year of mergers, acquisitions and growth. We saw the first IPO of alternative financier, Funding Options, which in its first 3 months of floatation made the FTSE 250, as well as many smaller acquisitions and mergers: 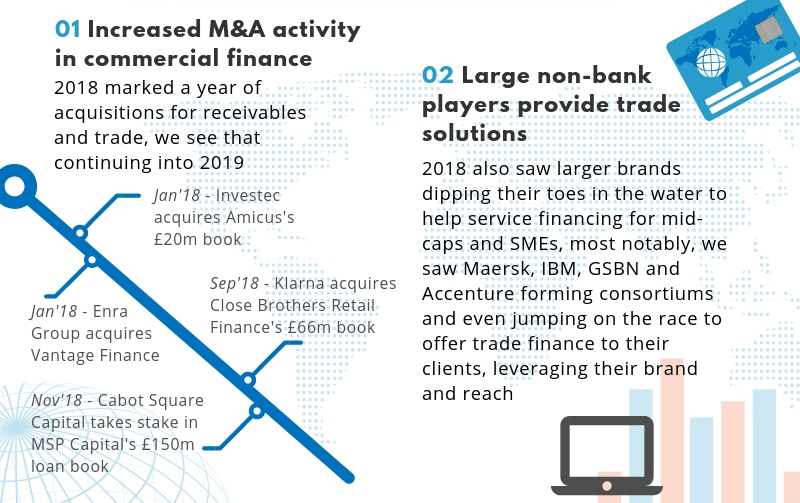 On the topic of commercial finance providers, 2018 also saw larger brands dipping their toes in the water to help service financing for mid-caps and SMEs. Most notably, we saw Maersk, IBM, GSBN and Accenture forming consortiums and even jumping on the race to offer trade finance to their clients. Large brands are now starting to leverage their brand and reach to mazimise and diversify revenue streams.

Both in developed and developing markets such as Africa, we’ve seen tremendous growth and derisking of trade from traditional lenders and banks. More funders have risen, supporting midcaps and SMEs from a trade perspective. We also saw many new entrants, mainly non-bank institutions and fintech platforms who have actively sought to bridge the gap and intermediate between liquidity and capital producers and corporates. The origination platform model, very popular in other areas of commercial debt and finance, has certainly helped distribute trade risk amongst different liquidity providers. Why? A double-digit yield industry is certainly an opportunity which will continue to be disrupted by fintechs and platforms.

At the start of the year, we spoke about cautious optimism for blockchain and distributed ledger technology (DLT) to facilitate trade. 12 months on, taking a look at 2018, we certainly saw advances in both fintech and DLT, so we’ll address both.

The investment into trade finance fintech continued in 2018, but one notable highlight in this space was SWIFT’s new gpi initiative, according to Andre Casterman, CMO at INTIX and Chair of ITFA Fintech Committee. We saw a clear move away from traditional messaging paradigms such as SWIFT, ABEX or FTP on the payments and treasury side to the implementation of real-time data feeds. SWIFT Global Payments Initiative (gpi) was launched in 2018 with 120 banks across 200 countries to facilitate track and trace functionality across cross-border transactions. As a result, SWIFT gpi now results in collecting real-time payment data and providing a cloud-based end-to-end customer friendly view of payment information.

From a DLT perspective, DLT became real in 2018, moving from proof of concept to real transactions. The first live transaction with ING and HSBC on trade finance was facilitated with the R3 consortium of 11 banks (and growing). Dubbed ‘Project Voltron’, the first live trades are forecasted to get started in early 2019, facilitated by the Corda blockchain platform.

There are two challenges which we believe need to be addressed when it comes to DLT and e-authorisation in trade; standardisation and legal framework. The US legal framework does not yet allow for electronic signatures and documentation, so it doesn’t enable this type of trade. Despite tremendous efforts from the ICC relating to e-bills of lading, adoption in local markets, governments and legal frameworks are critical for enabling paperless, digital trade.

From a standards perspective, enabling interoperability between platforms requires standardised data doormats and fields. For DLT, there are already two different networks that banks have paired up with to enable blockchain based trade. Setting up consortia such as Trade Information Network and the Universal Trade Network are critical to set common standards for data exchange, integrate between different platforms as a multi-bank solution. TIN and UTN are ultimately helping create a registry of open account transactions, which we’ll definitely see more of in 2019.

Trade certainly faced its challenges in 2018. As Chris Southworth said at our ‘Brexit Business’ event in October: “We’ve seen a change in political view on a higher level; a polarisation of left and right. This has led to the liberal middle vanishing, instead, there are national leaders coming into power with widely varying points of view on how they are going to negotiate with global partners.”

Trade wars, Brexit and similar geopolitical tensions in both established and developing economies prevailed, and sets global trade (hailed universally as an economic force for good) with a considerable headwind as we go into 2019. 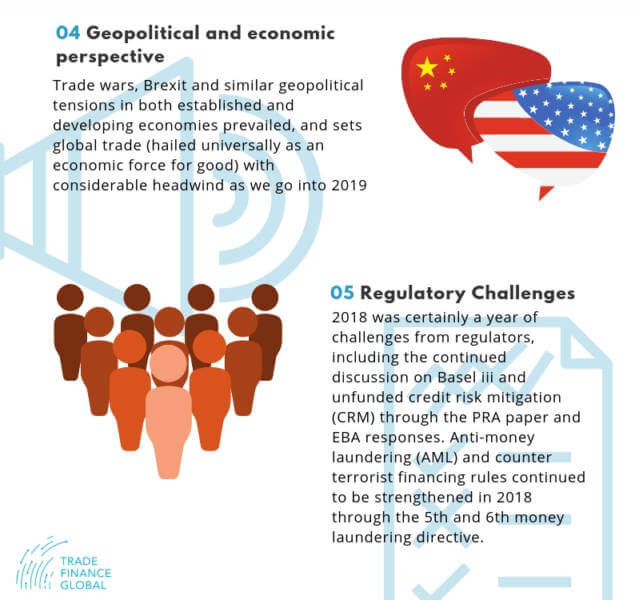 2018 was certainly a year of challenges from regulators, including the continued discussion on Basel iii and unfunded credit risk mitigation (CRM) through the PRA paper and EBA responses.

Despite the implementation of Basel iii, the treatment from the regulators has been harsh and bad news for banks. The Basel IV idea of a ‘level playing field’ is potentially dangerous. They don’t seem to understand Credit Risk Mitigation, which causes banks to object reports. Basel IV is currently at the directive level, so it’s not too late to act, as we heard from at a Breakfast Seminar last month.

At the end of the day, trade continues as an engine for economic growth, the backbone for all markets and a part of every person’s life. Whether through a different trade route, under different tariffs or via a transformed supply chain, cattle need soybean, soybean needs fertilizers and fertilizers require machinery; all complex supply chains that will continue going around and around. So, for practitioners, traders, producers and financiers, no matter what the challenges and headwinds we face into 2019 are, trade will still go on. As an industry, the advances we make in terms of technology, experience and ease will only help facilitate trade.

Resilience and developments of Factoring in CEE & ...