Who’s Who? The Consortia and Networks of trade finance revealed

Trade Finance Global today releases a map of networks and consortia in the trade finance and shipping space. Highlighting the key technology providers, DLT involved, banks and participants on each network, the map provides insight into the complex ecosystem of blockchain players in trade finance.

Trade Finance Global today releases a map of networks and consortia in the trade finance and shipping space. Highlighting the key technology providers, DLT involved, banks and participants on each network, the map provides insight into the complex ecosystem of blockchain players in trade finance.

Open account trade, an increasingly popular method reportedly accounting for 90% of trade volume, places the financial burden on the exporter. To overcome the risks associated with this financial burden, exporters often seek external sources of financing.

Without DLT, these alternative financing solutions, more often than not, eliminate the visibility into trade deals that banks traditionally need to know at which key points to step in and provide value. Through establishing themselves as key first movers in the DLT space, banks, joining forces to form value expanding consortia, are seeking to attract customers looking to reap the benefits of DLT on trade finance.

we.trade Innovation DAC is a joint-venture company owned by 12 European banks. It started with nine banks in January 2017 under the name of Digital Trade Chain and later officially changed to we.trade at SIBOS in October 2017.

Together with IBM, we.trade has developed a digital trade platform based on Linux Foundation’s Hyperledger Fabric to run on the IBM Blockchain Platform. The platform is built to simplify the trade finance processes by digitalizing the management, tracking and security of domestic and international trade transactions. we.trade is the first blockchain-based trade platform for banks and their commercial clients in Europe.

The Marco Polo consortium, powered by R3’s Corda DLT platform, consists of over 20 banks comprising a global reach. The fundamental aim of the network is to facilitate trade and working capital finance solutions. This namely includes receivables finance, factoring, and payment commitment with and without financing. It also provides secure, distributed data storage and bookkeeping, identity management, and asset verification among other features.

Open APIs and legacy system compatibility allow banks to easily integrate to their corporate clients with their ERP systems. This helps to limit internal disruption and eases communication with enterprise clients. The first transaction on Marco Polo was conducted in March 2019.

Commodities have always been difficult and complex products to finance. They typically have low margins and goods are traded cross border in jurisdictions where there may be a lack of trust between counterparties. These facets inherently raise the risk of such transactions, contributing to many financiers hesitation to work with new or growing companies. DLT’s cost-reducing promise will increase margins while its deterministic trust structure will allow firms to partake in transactions that they previously would not have even considered. In the marketplace today, there are two major DLT networks operating in the commodities space.

komgo is a live commodity trade finance digitization tool built on the Quorum blockchain infrastructure. Through the komgo network banks, traders, and all other participants are able to transact off the same secure software. This simplifies and secures the process and bring a level of scalability that was previously not possible.

The main features of komgo include several digital trade finance related products (including LCs, SBLCs, receivables discounting and inventory financing), allowing commodity houses and other players to submit digital trade data and documents to financing institutions and apply for credit directly on the platform, and a KYC solution, standardizing and facilitating the process while maintaining privacy by transmitting data on a need to know basis: users can now benefit from a single source of trust to exchange documents on a secure and private network to perform KYC tasks. The first transaction on the komgo platform was announced in December 2018.

Vakt, also powered by Quorum, is a blockchain based post-trade platform designed for the oil industry. As a post trade platform, it connects key parties to trades allowing them to handle every step between the initiating trade and final settlement. This includes deal recap, confirmation, contract, logistics, and invoicing. Essentially, Vakt’s management of the post trade cycle eliminates reconciliation and paper-based processes.

Partnering with Komgo’s commodity trade financing network, Vakt will concentrate on the actual raw material transaction, allowing for deals to be processed through the platform. It was originally launched in 2018 by nine of the largest players in global energy commodities trading. Since its launch, it has grown to 12 major shareholders, seven of whom it shares with the Komgo network.

The logistical operations behind the movement of goods from one location to another is frequently cited as being ripe for innovation. The process can include a large number of stakeholders including the importer, exporter, customs authorities, port facilities, shippers, and NVOCCs to name but a few. Currently, each of these entities maintain their own independent record of the activities, which must be manually reconciled upon the receipt of physical documents. This injects unnecessary costs into the supply chain while fostering the potential for logistical delays in delivery. DLT is frequently touted as a means of eliminating these costs, creating value in the process. Two major platforms are seeking to implement solutions in this area.

CargoX is an independent supplier of an on-chain bill of lading (B/L) powered by the Ethereum network. Additionally they have created a Blockchain Document Transaction System (BDTS) open source protocol to tokenize, encrypt, and transfer the B/L along with any additional documents required for trade processes. Additionally, the system API is enabled for integrations and its inter-operable with other blockchains, meaning it can be integrated into other ERP systems to supplement their functionality.

In addition to the promised cost savings for creating the B/L, CargoX will also speed up the process, reducing 5-10 day document transport times to mere seconds. Furthermore, the lack of physical documentation significantly reduces the courier costs associated with transferring the documents between multiple stakeholders and eliminates the costs of filing paper.

Formed in August 2018, TradeLens,  jointly owned by IBM and Maersk and powered by the Hyperledger Fabric blockchain, is a trade platform for containerized shipping, connecting the entire supply chain ecosystem. The current TradeLens ecosystem consists of various organizations including carriers, ports, terminal operators, and freight forwarders. Document and event creation and management can be handled on native systems through open API access, or by accessing the built-in user interface. The platform is designed to facilitate end to end supply chain shipping and documentation, which involves a large number of diverse parties. Each transaction and event, however, is recorded with privacy at the forefront, restricting visibility to authorized parties on the channel.

Letters of Credit and E-Bills of Lading

The digitization of traditional tools like the Letter of Credit and Bill of Lading are being investigated headlong. Prior to DLT development, tools such as Bolero’s e-Bill of Lading (eBL) and Commerzbank’s Bank Payment Obligation (BPO) have sought to do just this. They have received some, but limited traction along the way, failing (to date) to achieve the network effects necessary to drive value. Currently, two major consortia are investigating applying DLT to help tackle the issue and quell digitization concerns.

eTrade Connect is an Asia-Pacific consortium managed by the Hong Kong Monetary Authority and powered by Hyperledger Fabric. Launched in September 2018, the consortium aims to build better trust among trade participants, improve efficiency, reduce risks, and facilitate trade counterparties to obtain financing by digitizing trade documents and automating trade finance processes. Since its launch, eTrade connect has grown to 12 banks and signed a memorandum of understanding with the European we.trade consortium operating on the same underlying technology. While primarily focusing on the Asia-Pacific region, this partnership may help open a corridor between Asia and Europe.

Voltron is coalition over 50 banks and corporates delivering a Corda-powered open industry platform to create, exchange, approve, and issue L/Cs. The platform, currently accessible to all customers of member banks, will enable banks to provide faster service levels, financing decisions, and lower rates to their customers. In addition to Voltron created documents, trade documents produced on external networks by a corporation’s supply chain partners can also be digitally sent, verified, and processed in Voltron.

Launched in October 2018, this globally reaching consortium completed its first transaction in April 2019.

Trade Finance Global have put together a full map of who’s who in the blockchain network, view our interactive map and download our 40 page whitepaper below. 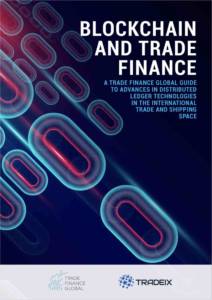