We spoke to Anabel Gonzalez during the World Trade Symposium in New York. We discussed whether the current US-China trade war had a positive impact on Latin American trade flows. Geopolitical uncertainty continues to threaten foreign investment and economic growth, particularly in emerging markets. Policymakers around the world are fretting about trade uncertainty and its impact on access to business finance, meanwhile, innovation and competition remain critical for economic growth.

We spoke to Anabel Gonzalez during the World Trade Symposium in New York. We discussed whether the current US-China trade war had a positive impact on Latin American trade flows. Geopolitical uncertainty continues to threaten foreign investment and economic growth, particularly in emerging markets. Policymakers around the world are fretting about trade uncertainty and its impact on access to business finance, meanwhile, innovation and competition remain critical for economic growth.

Anabel Gonzales, thank you very much for joining us live from New York at the World Trade Symposium. So to start off who are you? Where are you from? What do you do?

My name is Anabel Gonzales. I am originally from Costa Rica and right now and I’m a non-resident Senior Fellow at the Peterson Institute for International Economics.

The landscape for trade has changed significantly in the last three years, in terms of competitiveness, regulation, etc. And we know about the key themes, trade wars, Brexit etc, etc. What is the impact this is having on investment in emerging markets, SMEs and also access to business finance?

Right. So why is it important to stimulate competition and innovation and is geopolitics stifling this?

This is also a very good question. Now innovation is critical, because this is how we bring in new products and new processes to the market; and competition is also, if you wish, the other side of the coin because for innovation to expand broadly, you need competition so that prices can be lower than more people can have access to those innovations. I do believe that the geopolitical confrontations that we’re seeing right now are impacting both innovation and competition, again, through this uncertainty factor. And moreover, in some cases, since you have new investment screening mechanisms and more stringent investment screening mechanisms, export controls underlying, then you see that this is resulting even in restrictions on visas for researchers travelling from one country to another. All of this is having an impact on innovation, which ultimately has an impact on productivity growth as well.

Thank you. I guess this is more of a high-level question. But what is the role of a multilateral organisation such as the WTO and the ICC in facilitating global trade? And can you pinpoint a couple of examples of how this actually works in reality?

If you take for instance, the global trading system for the past 17 years, this is a system that has been governed by a set of rules based on non-discrimination, on transparency, on binding enforceable rules, on tariffs and other trade policies in instruments and the World Trade Organisation (the WTO) and before it the GATT have been at the centre of it, supporting that trade. So let me take, for instance, an agreement recently implemented in the context of the WTO, which is a Trade Facilitation Agreement. The trade facilitation agreement aims at having governments lower the cost of the trade so that businesses can trade more easily. Some studies show that the full implementation of this agreement can lower trade costs up to 14%. And this is very important because, in a world where trade restrictions are increasing, you can continue to support at trade as a driver of growth.

Great! And Anabel you have a lot of experience in Latin America and Latin American trade, which we see is often underreported in the world of trade and trade finance. What are the key themes going on right now? And most specifically, what is the impact of the US-China trade on Latin America trade flows and growth?

Well, you know, frequently we see that some people are argued that this trade confrontation between the US and China is beneficial for Latin America because there can be trade and investment diversion. So the Chinese buy Brazilian soybeans instead of US soybeans, or investment that was going into China, can go into Mexico. The reality is that the impact of these trade confrontations, actually, impact negatively Latin America. If we look at trade flows this year, for instance, they’re estimated to have 1.2% growth, which is the lowest since the financial crisis; or for instance, Foreign Direct Investment (FDI) has declined by 50% in 2018. So this is not good news for Latin America. For Latin America to grow, it needs a conclusive global environment and in the context of trade confrontations, we’re not seeing it.

Right, and Anabel, final question. What are you most excited about here in New York at the World Trade Symposium?

Well, I think it’s a great forum and I’ve enjoyed very much the discussions on how technology and in particular digital technologies can support trade.

Anabel, thank you very much for joining us on Trade Finance Talks TV.

Thank you very much for having me. 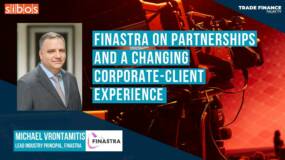