The US Dollar Strength About to Fade, But that Doesn’t Mean the EUR/USD Will Rally

Even after a quiet Monday this week, the pound sterling continued to surge against major currencies yesterday. As a result of recent Brexit polls favouring ‘stay in’, as well as… read more → 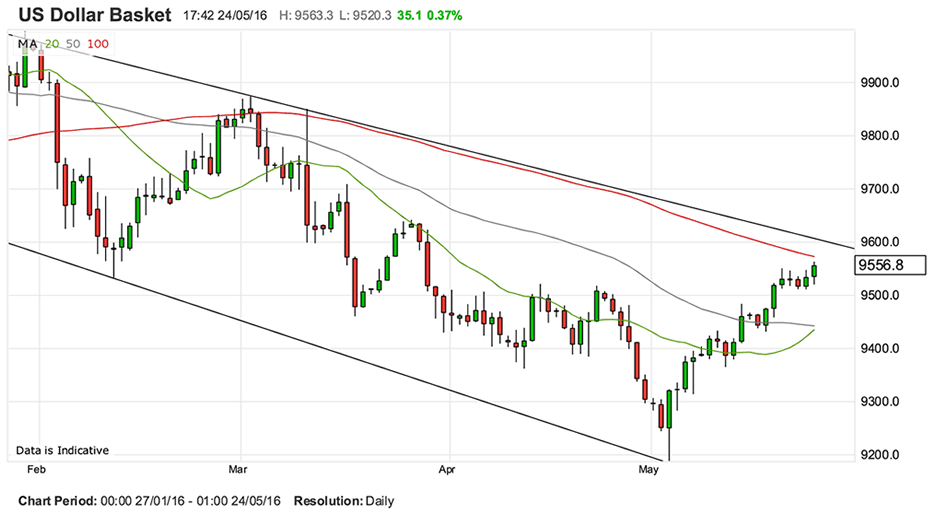 Even after a quiet Monday this week, the pound sterling continued to surge against major currencies yesterday. As a result of recent Brexit polls favouring ‘stay in’, as well as uninspired Eurozone sentiment, the pounds recent rally over the last week continues.

We spoke to Gary Howes, currency expert at Pound Sterling Live to find out what’s happening in currency markets.

The US dollar has roared back into contention this May after what has been an undoubtedly difficult start to 2016. Can the move higher continue?

The US dollar complex weakened by around 8.5% from February 2016 up to the end of April 2016 confirming the dollar’s longer-term cyclical recovery was in trouble of faltering.

However, the USD has proceeded to outperformed all G10 rivals in the first two weeks of May and was only pipped to top spot by the British pound in the third week of May.

Perhaps this rally in the USD should come as no surprise – the dollar has ended May higher than it started in eight out of the past ten years.

This is a season that belongs to the dollar; but we are not content with laying USD strength at the door of seasonality as this would unlikely give a useful handle for the dollar’s outlook.

Seasonality aside, the upward adjustment in Fed interest rate expectations since 12 May and better-than-expected US data have played crucial roles in the market’s newfound desire for dollars.

The release of the April FOMC minutes on the 18th of May triggered a big move in the U.S. dollar after they revealed that, “most Fed officials saw a June hike likely if economy warranted.”

With expectations for higher rates increasing currency has flowed into the US as yield-starved investors seek out better returns.

Some analysts argue that the dollar has been subdued in its response to the adjustment so far in US rate expectations with analysts at BNP Paribas describing the rally in the USD as being “moderate” versus the lower yielding currencies such as the euro and yen.

“The price action remains consistent with our bearish view on the USD vs. the EUR and JPY though, with the USD still vulnerable vs. those currencies if the risk environment does begin to react more notably to Fed signals and any acceleration in USD gains likely to short circuit itself quickly if it precipitates a turn in the risk environment,” says a note on the matter from BNP Paribas’ FX Strategy team.

Analyst Georgette Boele, Co-ordinator for FX and Precious Metals Strategy at ABN Amro believes that this could prove to be yet nothing more than a seasonally favourable May for the USD.

“Is this a re-start of the US dollar rally? In short, no. We see this movement mainly as a short-term US dollar recovery. We continue to hold the view that the multi-year dollar uptrend is over and has turned negative,” says Boele.

ABN Amro believe that we are merely witnessing a short-term wave of strength, and only were the US dollar index to break above the 200 day moving average would we be able to technically define this as a sustainable and longer-term move.

Furthermore it is pointed out that were the Fed to hike rates this year, it will be gradual.

A 25bp rate hike by the Fed this year is now roughly priced in by financial markets.

In addition, US real yields, taking into account inflation expectations, will likely decline.

“This will weigh on the dollar. So, the near-term upside in the US dollar is limited in our view,” says Boele.

What would change the overall US dollar picture is aggressive Fed rate hikes responding to a strong economy.

But the Euro / Dollar Exchange Rate Could Fall

While BNP Paribas are wary of the dollar being bitten by a euro recovery, others point out investors should be aware that US dollar weakness will not be ubiquitous.

Kamal Sharma at Bank of America Merrill Lynch says, “investors need to be more selective in where they play USD strength.”

Indeed, “we remain bearish EUR/USD, expecting more ECB easing and a Fed hike this fall. We have revised our projections to reflect the USD sell-off and now expect EUR/USD to weaken to 1.08 by end-2016,” says Sharma.

Bank of America had previously forecast the EUR/USD to fall to parity before.

While parity is still possible it would require substantial improvement in USD data, making the Fed confident to hike at a constant pace.

“We continue to expect EUR/USD to strengthen in 2017 and stabilise to its long-term equilibrium, slightly above 1.15,” says Sharma.