The US Dollar has More Fuel Left in its Tank

Donald Trump’s US presidential election victory has shaken foreign exchange markets notably and set them on a new direction. But how long can the trend extend for? The US Dollar… read more → 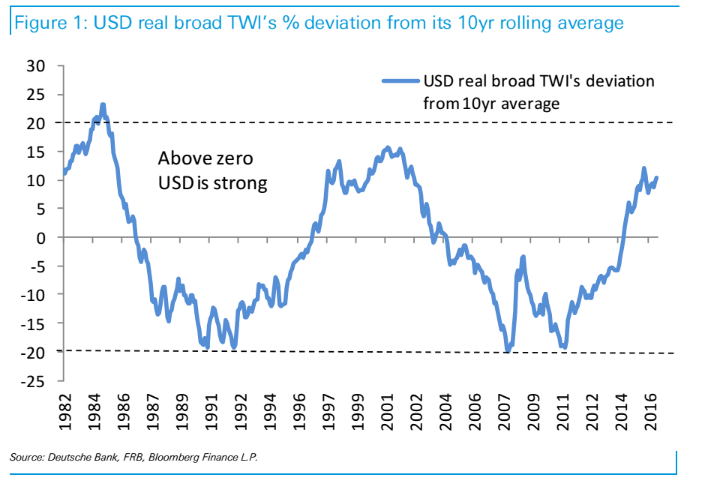 Donald Trump’s US presidential election victory has shaken foreign exchange markets notably and set them on a new direction. But how long can the trend extend for?

The US Dollar was one of the all-out winners of Donald Trump’s election victory as markets anticipate: 1) fresh fiscal stimulus 2) corporate tax reform 3) a faster pace of Fed hikes.

All these have played a part in forcing lower the price of US government bonds which has in turn seen the yield paid by those bonds shoot higher.

This dynamic has seen a great flow of US Dollars back into the United States as investors anticipate better returns over coming years.

Interestingly, Pound Sterling was actually the biggest winner as the UK currency managed to outperform its US counterpart for broadly similar reasons.

UK bond yields rose sharply as markets priced in higher inflation in the UK as well as expectations that Trump would willing enter a trade deal with the UK whereas his predecessor was quite happy to leave the UK at the ‘back of the queue.’

The question now though is whether this pro-GBP, pro-USD ‘Trump trade’ will extend.

“Until there is clarity around the magnitude of fiscal stimulus and therefore the persistence of this Treasury sell off, the dollar’s broad gains can continue to new cycle highs,” says John Nomand at JP Morgan.

Nomand writes as the US Dollar Index hits a 14-year high leading some to believe the move has extended too far.

However, a look at previous US Dollar cycles shows that this move has further to extend.

Analysts at Deutsche Bank believe that the Dollar rally has a further ~5% to go based on previous cycles.

“It is possible that a strong USD will be worn by the coming administration as a badge of honour – a signal of global confidence in “Trumpism,'” says Deutsche Bank’s Alan Ruskin who suggests there is a good chance the incoming Trump administration will look favourable on a stronger Dollar.

JP Morgan agree that there is further upside but believe these gains might be capped at an additional 3% on their US Dollar index, since those levels would correspond to three Fed hikes between now and the end of 2017.

The market currently prices about half that scenario, which means 2-yr rates could still lift about 35bp to fully price Trump’s near-term positive impact on the economy.

Such a move would deliver about 3% to 4% trade-weighted appreciation JP Morgan believe.

Longer-term, JP Morgan believe the Trump presidency should be US Dollar positive.

Since Trump as a candidate was unlike anything previously seen in modern American politics, perhaps the only certainty over the next four years is that his policy choices as President may also have no precedent.

“But lack of precedent shouldn’t imply lack of conviction on all markets, since core campaign pledges on trade protectionism and fiscal stimulus are both USD-positive versus some currencies,” says JP Morgan’s Nomand.

Note though that whether trade protectionism is a positive for Pound Sterling is questionable and raises questions on what any future US-UK trade deal would look like.

Reserve currencies – such as the Dollar and Sterling – are expected to outperform emerging market and commodity currencies which are obvious targets for a slowdown in a world that is turning back on globalisation.

Countries like South Africa and Australia are two examples of countries that have open economies that rely heavily on exports and could therefore fund a stronger Dollar.

The Dollar has rallied of late as markets priced in a sure-fire 90% chance that the Fed will raise rates in December.

Furthermore, expectations for further rate rises in 2017 have increased.

“This means there will probably be a lot of USD dip buyers if and when the USD ever has a negative day. With negative results to show and the year almost over, FX managers may also have little choice but to chase the USD rally,” says Stephen Gallo at BMO Capital in London.

BMO Capital are looking for another 3-6% of USD upside between now and the day after the 14-Dec FOMC meeting.