In the early hours of the morning, President Trump raised a further $200bn worth of tariffs on Chinese exports (5,700 different products to be exact), moving the tariff from 10% to 25%. 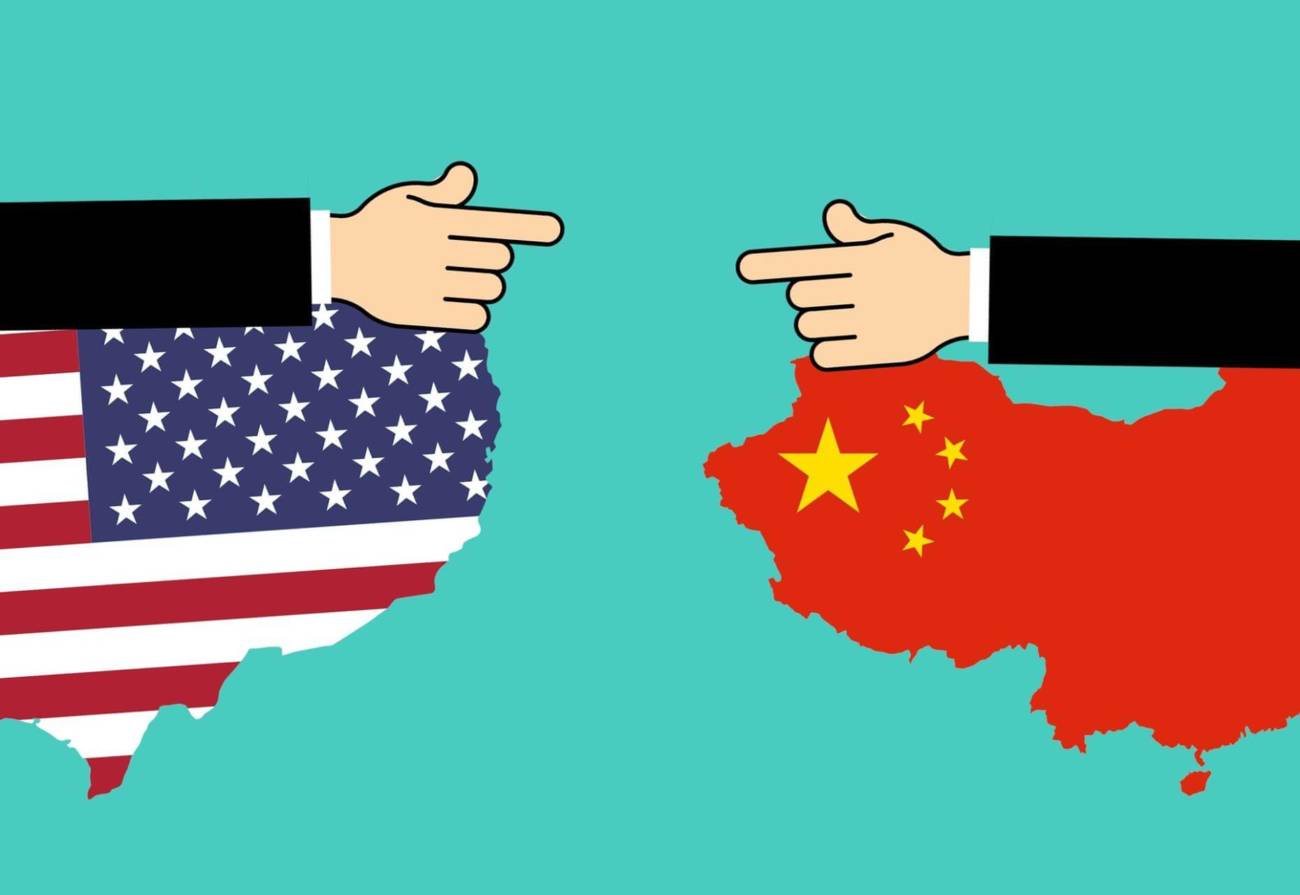 Talk is cheap. Actions are what matter … I hope that both sides come to the table and action follows words.” – Todd Rokita, member of the United States House of Representatives said the above back in September of 2018 at the World Economic Forums Global Economic Outlook annual meeting – Today has proved that both actions and talk are what matter.

In the early hours of the morning, President Trump raised a further $200bn worth of tariffs on Chinese exports (5,700 different products to be exact), moving the tariff from 10% to 25%. This was a dramatic escalation of the trade war that has already had devastating effects on the global economy; specifically, the world’s financial markets.

As expected, China has come forward in response and stated they have no choice but to retaliate. Liu He, Vice Premier of the People’s Republic of China met with Trump and his administration yesterday (May 9th) and by lunch time today, talks were completed.

Coming out of the talks, Mr. Liu described them as having gone “fairly well” and US Treasury Secretary Steven Mnuchin referred to them as “constructive discussions”.

The effects of Presidential Tweeting

After their first day of discussions Trump’s tariffs were raised, and the President himself turned to Twitter to address his reasoning behind the hike. Initially, he stated that there was “no need to rush – as Tariffs are NOW being paid to the United States by China of 25% on 250 Billion Dollars worth of goods & products”

Trump went onto threaten tariffs of 25% on the remaining un-tariffed Chinese products that the US engage with, and also enlightened his plans to invest national profits made from the tariffs in US agriculture. Alongside this, his tweet’s promised to buy more US agricultural products than China ever has, and redistribute the goods to starving nations as “humanitarian assistance”.

Finally, the 45th US President tweeted that tariffs will “add far more wealth to our country than even a phenomenal deal of the traditional kind”, in attempt to justify his tariff hike and try settle the increasing uncertainty this week has brought.

However, just what effect has the current tariff’s had on the US, and Is this increase in tariffs as good for the US as President Trump says it is? 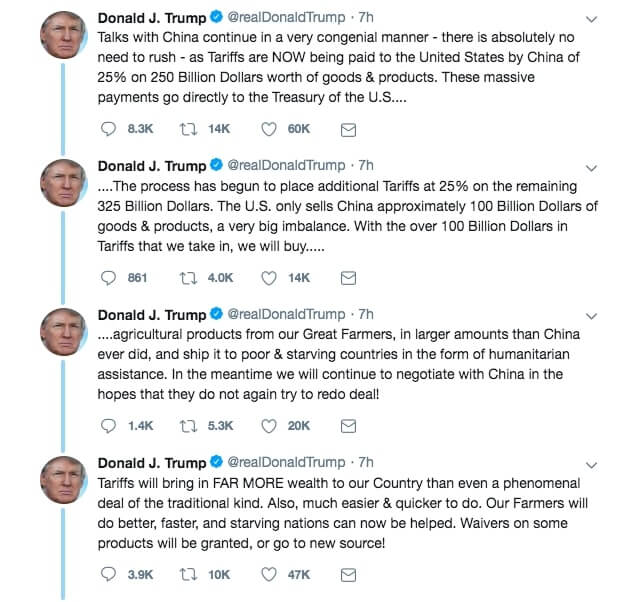 ‘Uncertainty’ is a term that is responsible for much of the price fluctuations experienced in global markets. The idea of ‘investor confidence’ relies heavily on the level of uncertainty surrounding the investment. With increased uncertainty, comes more volatile markets.

How have global markets then fared throughout this past week? On May 5th President Trump initially announced today’s tariff hike through twitter, and as we will see this tweet alone had significant impacts.

If we look to highlighted area A, we will see the exact reaction of the S&P 500 index to Trump’s proposed tariff increase tweet.

On Friday 3rd May, the US Index settled for the weekend at a value of 2943.24. Trump’s tariff tweet went live at 9:08am on Sunday 5th  May, and by the time the markets had opened and adjusted on Monday 6th, the price value for the S&P had fallen -1.26% to 2906.04. As Standard and poor’s 500 is a collective market-capitalisation weighted index, this is a fairly good indicator of how the largest US publicly traded companies fared as a result of the tweets. 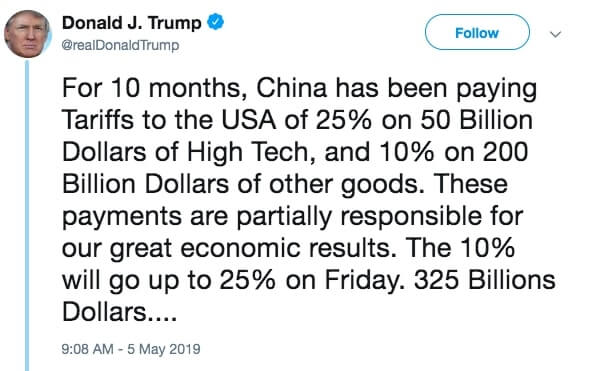 From the 3rd May index value of 2943.24 to today’s market closing value, overall the S&P 500 index has fallen -2.23% to a value of 2877.75. The S&P has suffered some clearly significant decreases in it’s value throughout the past week (Points A,B,C and D on the index chart above), and much of this is down to political trade tensions and the likelihood of a prolonged, escalated trade war.

Point B exhibits the worst 1-day drop seen since the first week of 2019, and the S&P suffered -1.7%. There was large reported losses in the industrial and technology sectors, which is understandable as both sectors rely heavily on both imports and exports for their business. With rising tensions, comes the aforementioned uncertainty resulting in investors selling their shares and thus, devaluation. 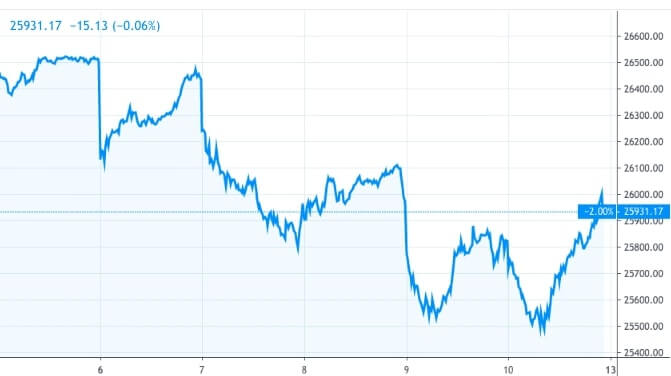 In an almost identical fashion, we can see the Dow Jones industrial Average’s reaction to the tweet’s and hectic week following. Point A refers to the same reaction as seen in the S&P, with the Dow falling slightly more at -1.38% (26507.68- 26141.15).

For the Dow Jones index – comprised of the price movements of 30 large US companies active on the NYSE and NASDAQ – Point B was slightly more severe due to the member companies (Nike, Tesla, General motors) feeling the effects of increased trade tariffs from China; with whom they trade significantly with. Boeing (BA) in particular fell 3.9% over the course of the day, which contributed toward the industrial average’s decline.

The IMF, WTO and HSBC are just some of the international organisations that have spoken out about the global effects of tit-for-tat trading wars. The result is revised trade projections, uncertainty in the markets and a general slow-down in the levels of economic activity.

Global growth for 2019, and subsequently 2020 is projected at 3.3 %, following two years of global decline. Political tensions such as Brexit and sanctions on such highly traded commodities such as Oil have bundled together with the US-Chinese trade war we are seeing today and caused massive fluctuations in global trade patterns, affecting businesses all around the world.

As explained in the IMF’s April release of their Economic Outlook, global growth is being hindered by political tensions world-wide. As displayed in Trade Finance Global’s 2019 outlook on commodities, geopolitical tensions will continue to have exponential role in the global markets.

Many investors and market players hold out hope for a trade deal, despite today’s tariff hike. What is important to remember is that although Trump has tweeted his support for tariffs and has actively promoted what could be done with money raised, the reality of full-blown trade wars are grim and costly for all.

With the US raising import tariffs, it harms the demand for Chinese products but also increases costs for US companies that have to buy from China for their production goods. Furthermore, trade tensions and political tensions are one in the same, meaning that US companies that operate in China are likely to feel increased productivity constraints as tensions rise.

Unfortunately, as the US firm’s production costs rise it is unlikely that this will have an immediate effect on the company but more so the consumer. This is often the case when businesses face unprecedented increases in the costs of production, and so it is effectively the US (and world) consumers that lose out from these types of wars.

Not all doom and gloom

At around 2pm (GMT-4) Trump once again took to twitter, but this time it was not negative. Remember, many investors and finance players hope that there will be a resolution reached, and although there have been significant losses in markets there are many that are holding out for said resolution.

So, when Trump tweets the following markets can expect to react well:

The reference to Thursday’s talks as constructive may seem contradictive to Trump’s actions of increasing tariffs once more (and threatening further increases), but this behaviour further promotes the theory that this is but a negotiation tactic from the property mogul, which removes any fears that this will escalate to a full force trade war between the two nations.

Keep an eye on Trade Finance Global’s coverage of trade tensions, as we move into another vital week for international political and economic tensions.