The Russian Embassy in the UK posted a twitter picture with the words ‘Lame’ and a picture of a duck; this was in response to actions by president Obama. He… read more → 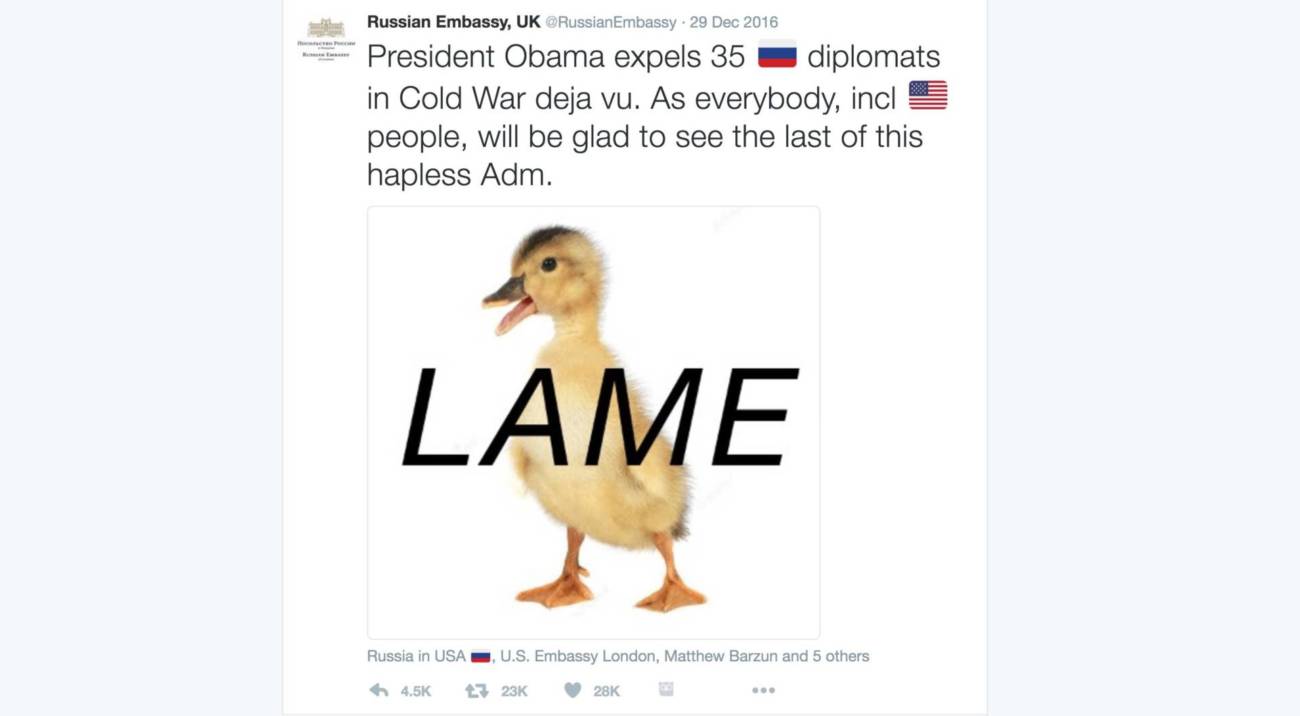 The Russian Embassy in the UK posted a twitter picture with the words ‘Lame’ and a picture of a duck; this was in response to actions by president Obama. He is removing 35 Russian diplomats from the US for hacking and interfering with the US election. Obama has ordered sanctions on Russia in an executive order following this alleged move. The findings of what happened were in a report issued by Homeland Security and the FBI. However, Vladimir Putin has come out and said that he will not expel 35 US diplomats in a tit for tat row.

Due to the fury of the US government relating to the Russian hacking; they have also closed two US based Russian compounds.

President Obama expels 35 ?? diplomats in Cold War deja vu. As everybody, incl ?? people, will be glad to see the last of this hapless Adm. pic.twitter.com/mleqA16H8D

Cyber interference and Russia – were the two linked?

It is alleged that there was cyber interference in the campaign for Hilary Clinton, the Democratic National Committee and further organisations. This was all with the aim of promoting the Republican campaign with direct assistance to Trump.

What was the reaction from the US?

Obama has used strong speeches to motivate the US population and encouraged them to be ‘alarmed’ by the actions of Russia.

Obama’s executive order aims to have greater authority in relation to dealing with countries who have tampered with other election processes. A main focus of pressure has been the two Russian intelligent services, the FSB and GRU along with companies assisting them. Allegations include the misappropriation of funds. The US released a 12 page report on the attacks, which can be seen here.

Even though Putin has outlined that there would be actions he would take in retaliation and it is standard for expulsions of diplomats to have responses of reciprocal action; Putin has dismissed this potential move. Many speculate that this may be due to the incoming president Trump who has outwardly explained his desire to work with Putin. He has publicly said that the US should focus on ‘bigger’ things.

We do note that an incoming president is able to reverse the actions taken. However, post the annexation of Crimea and other alleged hacking scandals along with the much-criticized Russian intervention in Syria; we wait to see what the incoming government will do. 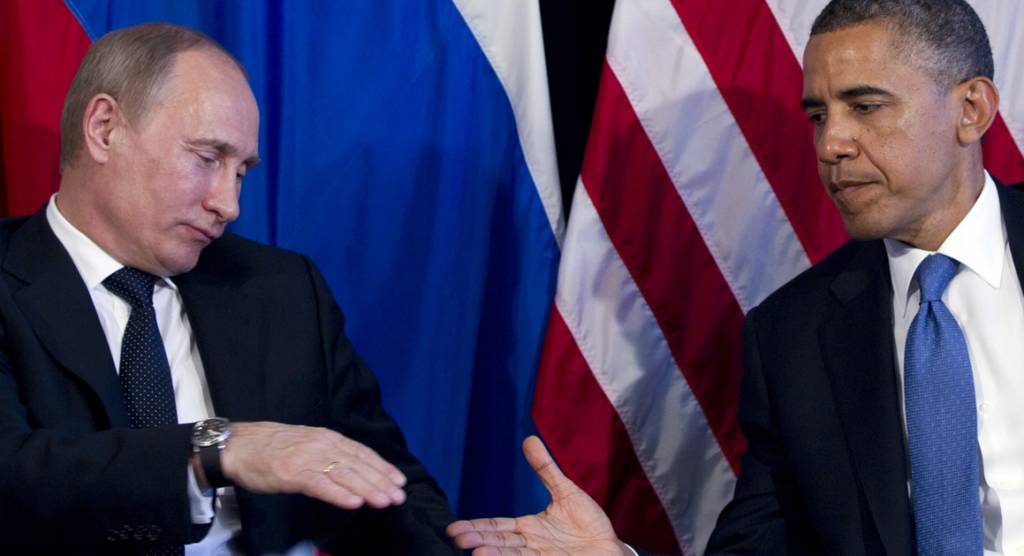 What is happening in Syria?

Following Russian military assistance to the Assad regime; America has seen to have been pushed out of the fore. Thus, it has had little say in relation to the current peace deal.

A ceasefire has finally been signed in Syria between the government forces lead by Assad and rebel fighters; the agreement has the full support of Russia and Turkey. The world is desperate to see a concrete deal in place after there has been six years of dispute and almost half a million people killed. It is also estimated that over 50% of Syrians have been forced to leave their homes.

Even though it is the third ceasefire that has come into effect this year; there are major hopes of it remaining in place. This is also because of the control parameters that have been put in place and the statement of intent to end the fighting.

There will be a meeting held in January at Astana, Kazakhstan’s capital to discuss a lasting peace. The meeting will include Turkey, Iran, Russia and possibly Egypt. It is however questioned how the different rebel groups have taken this peace agreement behind closed doors; including the stronger factions such as Jaysh al-Islam and Ahrar al-Sham Islamist movement. However, importantly terrorist groups were not included in the ceasefire; which include Islamic State and Jabhat Fateh al-Sham (the group prior to al-Qaida). Jabhat Fateh al-Sham has been the main proponent of ruining previous ceasefires, but the Islamist rebels have signed up to this ceasefire.

What has happened with rebel groups in Aleppo?

There has been little advance of the rebel groups, along with the loss in recent weeks of the city of Aleppo. This was the last major city of control held by the rebels. They have also continually felt pressure from aerial strikes from Russia.

How about Turkish and Russian relations?

They are diametrically opposed in outlook, as Russia is backing the Assad regime and Turkey support the opposition fighters. There was much fear that Russian and Turkish relations had hit a low point after Turkey shot down a Russian fighter plane when it came into their air space last year. However, publically these relations are slowly being repaired.

There have been agreements reached between Turkey and Russia, such as the agreement for those rebels that had suffered defeat in Aleppo and the civilians being allowed to leave prior to the Assad offensive.

Where will it leave Russia?

Russia aims to be the global dominant force following the partnership with Assad and success against the rebels.

With over 2 million refugees that have been driven out of Syria, there is fear of a further exodus if the Syrian government continues the fighting in Idlib, which sits at the border of Turkey. Turkey also worry about the northern Syrian expansion of Kurdish paramilitaries, who want to create an autonomous zone.

For Russia, this is the first attack outside of their borders since the Afghanistan invasion; showing its significance. This is alongside the strength it has shown next to the inactivity of the US, who ‘softly’ backed the rebel forces. In the event that the US is involved in peace talks, it is widely rumoured that this will only happen when Trump is in power.

The February and September agreements led by the US and Russia have failed; so we hope this one holds.