Graphene – The Next Big Thin(g)?

A new material has been discovered and its properties are so incredible, that new technologies emerged using it, revolutionizing the human life for the next century. While this sounds like… read more → 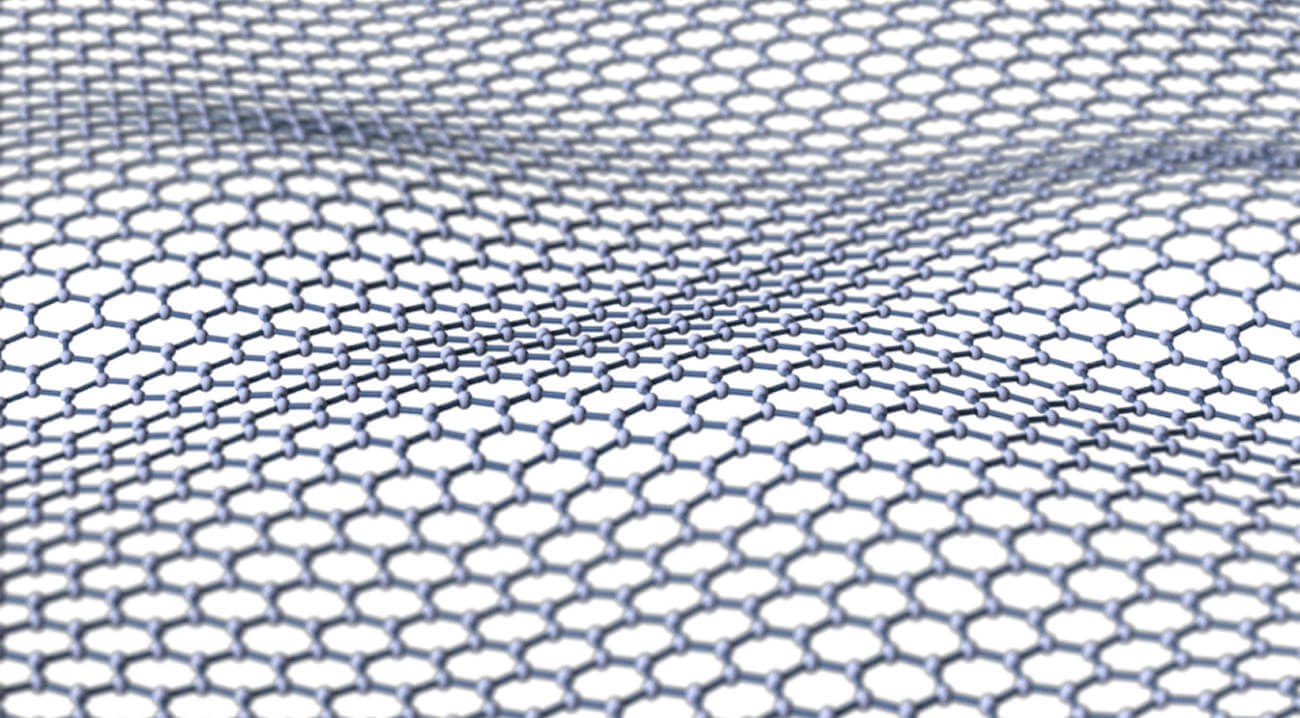 A new material has been discovered and its properties are so incredible, that new technologies emerged using it, revolutionizing the human life for the next century. While this sounds like the script for a new Netflix Sci-Fi series, what we are talking about here is graphene. And it is very real.

With a thousand times the electrical current capacity of a copper wire and a two hundred times stronger characteristic than structural steel, graphene will most certainly change the image of tomorrow’s world. Imagine driving thousands of kilometres with a single charge on your new electric vehicle, or, even better, charging your phone hebdomadary. That and more might very well happen sooner than later thanks to the discovery of this single layer of atoms.

First discovered in 2004 by researchers at the University of Manchester, graphene – a single layer of carbon atoms – will most certainly change the world for the best. The material has many unusual properties: not only is it the strongest one ever tested, it also efficiently conducts heat and electricity, and shows highly bendable properties. The discovery was so important, that both scientists behind it, Andre Geim and Konstantin Novoselov, were rewarded with the Nobel Prize of Physics in 2010.

Nevertheless, while the discovery of new application increases on a monthly basis, the market is currently still in a niche. The opportunities and investments to come are exponential. Though it is not broadly covered in the news yet, large players have already started to research the product. Among others: IBM, BASF and Intel. Even the European Union set up a 1 Billion Euro fund, “forming Europe’s biggest ever research initiative” and Samsung is using it in next generation of smartphone batteries. Indeed, as we can see below, the market is expected to grow exponentially in the coming years. 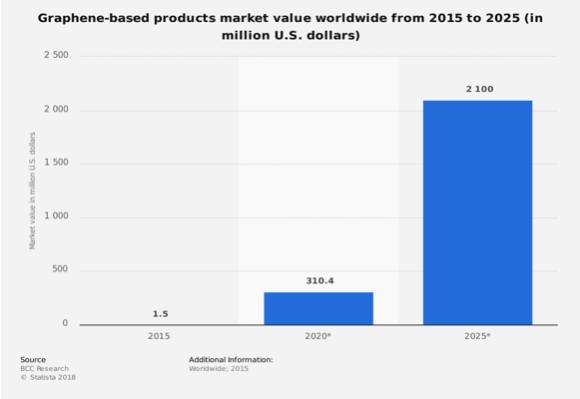 How to get it

As stated before, graphene is made out of carbon. Now, carbon, the sixth element, is omnipresent: 18% of the human body is made of it, hydrocarbons – the global source of energy – are mainly composed of it and its even found in large quantities in the atmosphere.

The simplest way to recover the material in the desired form, already as a single layer sheet (graphene), however, is in graphite, where it exists in its “natural” way. According to the US Geological Survey, the main reserve holders are Turkey, Brazil and China, with most of it currently produced in the latter.

There are, on a more scientific and experimental level, already techniques of extracting the carbon out of coal or different sources. Yet, should the use of graphite triumph, might we very well see new trading routes emerge and a new dynamic establishes itself.

Where to use it

But this applies not only to the few examples of its use cited above. In fact, an application for the wonder material can be found in all kinds of industries:

Researchers even removed the brownish colour of Whiskey, by filtering it through a graphene sheet. Now, here’s a task: look up for the applications of the material and in one month do it again. Then, simply be fascinated by the fact that there will be new applications discovered in the meanwhile!

From a trade financing point of view

While a large number of small applications can be distinguished, there are two major ones that will most certainly have an impact on the short term. Namely, the electronics and the energy characteristics.

By implementing graphene into hyper-efficient and hyper-fast processors, the game of global trading will definitely be changed. Especially, if the use of blockchain manages to break through, this will enable extremely fast and secure transactions, not only of financial but also documentary flows. If interconnectors get more efficient, information could be able to travel much longer distance and in a much larger amount than with carbon fibre. Complemented by having stronger and faster processor power to structure the data, the access and use of information in the coming decade could very likely become different from how we were used to seeing it.

The most relevant: energy storage and renewable energy.

Right now, an arguably major issue that needs to be solved in the world, is our reliance on fossil fuels and their emissions. Despite a few setbacks in global policy – with President Trump’s planning on leaving the Paris Agreement – the renewable energy trend cannot be denied and the switch towards carbon-free emission is stronger than ever. But so, the problems – the non-reliance as a source of energy – of the technology still prevail.

The current peculiarity for electricity generation is its non-storability. The consequence being, if there is a lot of wind, there is an excess of supply, while a lack of wind would never be able to satisfy all the coincident demand.

Then why don’t store it? We all have been through the experience of our old phone’s battery dying after a few years of usage, losing a large amount of its initial capacity. Interestingly, the standard volume of the new Apple iPhone X is 10.35 Watthour (Wh), which is equivalent to 0.00001035 Mega-Watthour (MWh). To picture, in one hour, the whole UK consumes (and generates) 30’000 MWh. The current challenge is to provide a battery that is, first, large enough to satisfy the swings in the peak demand, and second, stable enough to last years without losing the majority of its capacity. The discovery of graphene and its enhancing abilities of batteries is very likely to change this exact framework and will hopefully enable storage technology to provide the renewable sector with a cornerstone needed for further innovation. 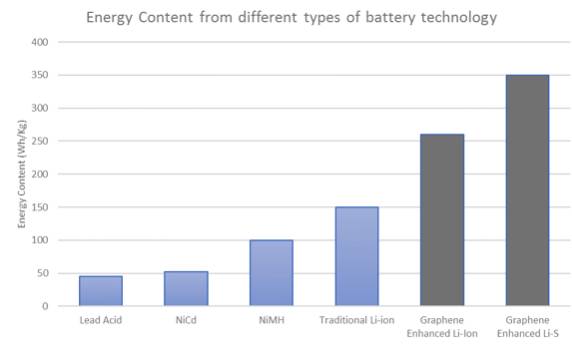 Additionally, like in processors, it could be used to replace silicon, which is needed in solar energy technologies. Thus, increasing the efficiency, enabling the construction of much smaller infrastructure – that will provide a larger amount of electricity for the same covered surface. Once more, increasing the efficiency, a word that seems to appear a lot when talking about graphene…

However, all this is only possible if the scientific and professional community manages to overcome the teething problems of graphene. As a matter of fact, graphene is so conductive, that the current state of the technology hasn’t enabled yet a way to “switch” it off, as a consequence, processors being constantly on and eating a large amount of energy.

Also, enhancing battery storage units with graphene is at the moment a very expensive endeavour. Yet again, economies of scale and the decrease in the marginal price of production will most probably decrease, the more advanced the technology gets.

There definitely is still a lot to do, but also, a lot of research is happening right now, and one should keep an eye on that progress, as it seems that the boat to participate in this innovation can easily be missed!

As perfectly described on the University of Manchester’s homepage: “Graphene is a disruptive technology; one that could open up new markets and even replace existing technologies or materials. It is when graphene is used both to improve an existing material and in a transformational capacity that its true potential can be realised.”