The meeting of Fed in March indicating that the Fed officials will start to shrink its balance sheet. This means after the interest rates have been raised one year ago,… read more →

The meeting of Fed in March indicating that the Fed officials will start to shrink its balance sheet. This means after the interest rates have been raised one year ago, the Fed officially began to consider another monetary policy normalization process. Fed’s large-scale balance sheet raised questions such us how to reduce and reduce to what level.

What is the size of Fed’s balance sheet?

Before the 2008 financial crisis, the Fed held about 900 billion US dollars of assets, mainly for the open market operation of the short-term US Treasury bonds. At the end of 2008, as the crisis continued, the federal funds rate plunged from 2% in September 2008 to 0-0.25% in December, and the Federal Reserve began to buy long-term government bond and MBS in order to pull down long-term interest rates since it could not continue to reduce short-term interest rates to support the economy. After three rounds of quantitative easing (QE), the Fed’s balance sheet has been expanded to 4.5 trillion US dollars, and maintained roughly at that level since then. At present, the Fed’s assets including 2.46 trillion (52%) of US Treasury bonds, 1.77 trillion (37%) MBS, 11% reverse repurchase agreements, and less than 1% Federal agency bonds, and inter-bank liquidity swaps and loans. 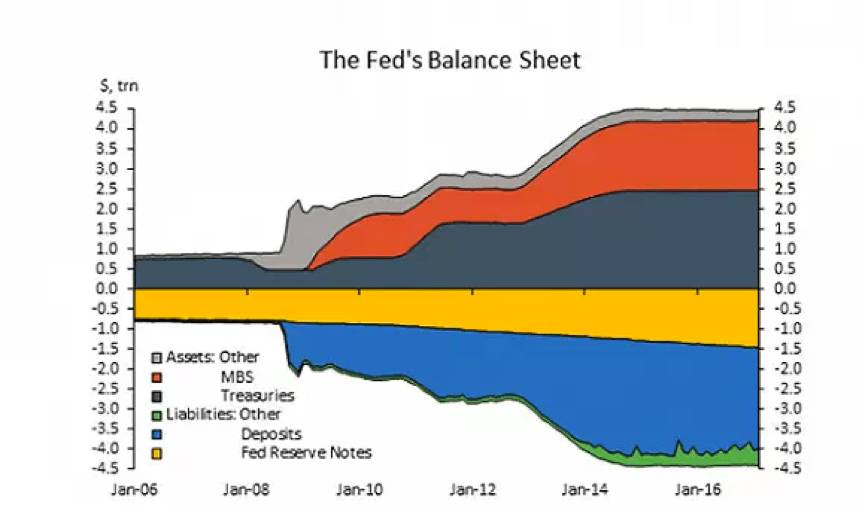 Compared to other years, more bonds will mature in 2018. From a longer period of time, nearly half of the debt will mature by 2020, the vast majority of MBS will mature after 2039. When facing the maturity of the assets, the Fed had previously reinvested to maintain its balance sheet unchanged. 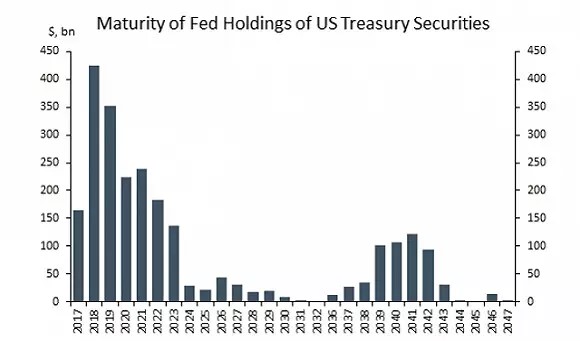 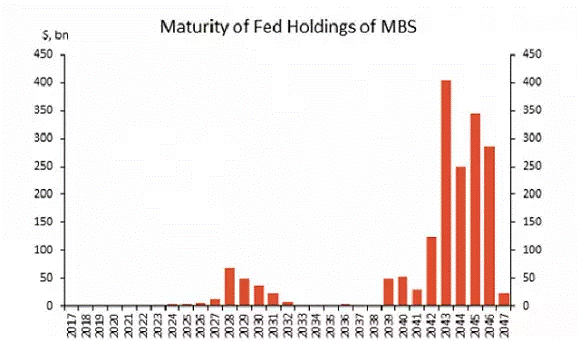 What is the downside of a large-scale balance sheet?

As economic growth continues and financial markets are on track, the Fed’s large balance sheet has not only lost its role in promoting the economy, but the cost now is far more than the benefits. A report by Chief Economist of Berenberg Capital Markets for the Americas and Asia, Mickey D. Levy pointed out that between 2012-2016, although the consumer and the real estate market are relatively healthy, business investment didn’t give positive feedback to low interest rates due to government regulations and tax restrictions. The Fed’s unrestricted QE and inflated balance sheet could not stimulate economic growth, on the contrary, it pushed up the stock market and the real estate market. The expansion of the Federal Reserve’s balance sheet has led to a severe distortion of the credit market. By buying MBS, the Fed’s monetary policy intervened the private sector’s credit allocation, making the mortgage interest rate remained low, resulting in too much credit to the real estate sector, sacrificing the activities of other economic sectors.

Furthermore, the Fed’s large-scale balance sheet blurs the boundaries between monetary policy and fiscal policy, exposing taxpayers to great risks. By buying US government bonds on a large scale and lowering interest rates, the Fed has reduced the government’s debt costs; the Fed’s long-term bond yields also increased government revenues. In the 2017 fiscal year, the Fed paid 110 billion US dollars to the Ministry of Finance, equivalent to one-fifth of the US government’s fiscal deficit. At first glance, this would benefit the government substantially. However, if the interest rate rises or the real estate market deteriorates, the government’s debt costs will rise, the Fed will pay less taxes to the Ministry of Finance, putting next generation taxpayers into risks. According to an estimation by Congressional Budget Office, interest rates will rise by one percentage point over the 10 years between 2018 and 2027, leading to an increase in the fiscal deficit of $ 1.6 trillion during the period.

Why unwind the balance sheet now?

Reducing the balance sheet is another currency normalization measure other than interest rates. The Policy Normalization Principles and Plans presented by the Federal Reserve in September 2014 showed: The committee will determine the timing and steps of normalization, that is, raising the federal funds rate and other short-term interest rates to a more normal level, as well as reducing the Fed’s holdings of bonds to promote job maximization and price stability.

However, in order to avoid “Taper Tantrum” phenomenon again, the Fed decided that the normalization of monetary policy will start very slow, from increasing the federal funds rate, to reinvesting in the matured assets. In June 2013, Ben Bernanke announced that the Fed will begin to reduce the size of asset purchases, which led to a significant fall of US Treasury bond’s prices. The decline also affected the other developed countries’ bond market.

There is a more realistic reason why Fed’s decide to reduce the balance sheets now. There will be a leadership structure change in FOMC. A released report by Goldman Sachs in March stated that if the new FOMC officials, especially the new chairman of the Federal Reserve, tend to support more radical shrinking (or even the sale of assets), the financial market may face higher uncertainty. Therefore, an early tone for the gradual contraction of the balance sheet could possibly reduce the risk of this uncertainty, since it would be difficult to let new FOMC make a significant change in existing policies.

What are the possible ways?

According to the prevailing view of the market, the Fed can choose two ways of unwinding the balance sheets: the active reduction or the passive reduction. Active reduction refers to the sale of assets before they mature; passive reduction refers to the gradually withdrawal of reinvestment. In the first case, the Fed will re-invest in July 2018, while make a monthly sale of 40 billion US dollars of assets. In this case, from the second half of 2018, the Fed’s balance sheet will be quarterly reduced by about 250 billion US dollars. In the second case, the Fed will gradually reduce its reinvestment in its assets over the next 10 months starting in December, but will not sell its assets.

In order to make the reduction more smoothly, the first round could can include a substantial part of the reinvestment of matured assets. For example, for every 100 US dollars of assets that will mature, the Fed can choose to re-invest 75, so that the speed can be slower than the asset maturity rate. When financial market has adapted to this new change in monetary policy, the Fed could reduce the balance sheets more quickly. At present, the Fed plans to take a passive action of the balance sheets, that is, gradually withdraw or stop the Treasury and institutional MBS reinvestment.

At present, the Fed plans to take a passive way of reducing the table, that is, gradually withdraw or stop the Treasury bonds and institutional MBS reinvestment.

Balance sheet in the long run

What is the optimal size of balance sheet in the long run?

As Bernanke said, the “optimal size” of the Fed’s balance sheet should be about $ 2.5 trillion, which will increase as the economy grows. The balance sheet should be consistent with the public demand for currencies, so the smallest balance sheet should be that the debt side is primarily currency and the asset is primarily government-issued bonds. However, the current circulation of the dollar has increased to 1.5 trillion US dollars. With the development of the nominal GDP growth, low interest rates, foreign demand for the dollar increasing, Fed officials expect the circulation of the dollar will be further increased to 2.5 trillion US dollars in the next decade. In other words, simply meeting the public demand for the dollar means that the Fed’s balance sheet would see a large increase far beyond the pre-crisis level.zBefore the financial crisis, due to the relative shortage of reserves, the Fed can change the size of the banking system reserves through the open market operation, which will adjust the policy interest rate into the target range. Nonetheless, with the large increase in bank reserves, it is impossible to change the policy rate through reserve supply alterations. The Fed began to set the reserve rate to control the policy rate.

So how far by which should the reserves increase in order to let the Fed be able to continue using the reserve rate as monetary policy approach? In December 2008, when the Fed began to use reserve interest rates as a policy tool, the banking system’s reserve size was about 800 billion US dollars. If the nominal GDP growth and bank debt increases are taken into account, the level of reserves required to adopt a reserve rate policy tool should be much higher than $ 1 trillion. In addition the money demand, the “optimal size” of Fed’s current balance sheet should be 2.5 trillion US dollars.

How will the balance sheet reduction affect the financial markets?

In general, banks absorb short-term deposits and issue long-term loans to exploit intermediate spreads. Because most of the assets held by the Fed are long-term bonds and MBS, the reduction of the balance sheet may make the long-term yield steeper, which is profitable for bank system. The reduction of the balance sheet is widely seen as the Fed tightening monetary policy, in general, tightening monetary policy will benefit the dollar, because more capital may flow into the US market to seek higher returns.

Empirically, after the Fed’s meeting summary has released in March, the bond market didn’t response very much to the new information. Since April 5, 10-year US Treasury yields have fallen by 0.14 percentage points. In contrast, from “Taper Tantrum” to the beginning of September that year, 10-year US Treasury yields rose nearly 1.4 percentage points.

In response to the financial crisis that erupted in 2008, the Fed’s unconventional monetary policy of quantitative easing has expanded its balance sheet by nearly five times over seven years. At present, with the improvement of the US economy, the balance sheet can be said as the last “historical issues” of crises.

The shrinking of the balance sheet will still be a significant issue of Fed. Not only because it is important to financial markets, it will also let Fed learn to deal with the next potential financial crises.

For more information on Fed’s policy and its potential influences, please visit: www.tradefinanceglobal.com

Bio: Xinran Liu is currently studying MSc Financial Economics in University of Birmingham, writing for the Trade Finance Global. Originally from China, she is interested in Chinese and America financial market, trying to interpret it with her own unique perspective.