We spoke to Sean Doherty, FX expert at RationalFX about FX markets in April 2018. The second half of April has challenged accepted values. The dollar’s decline is not a one-way… read more → 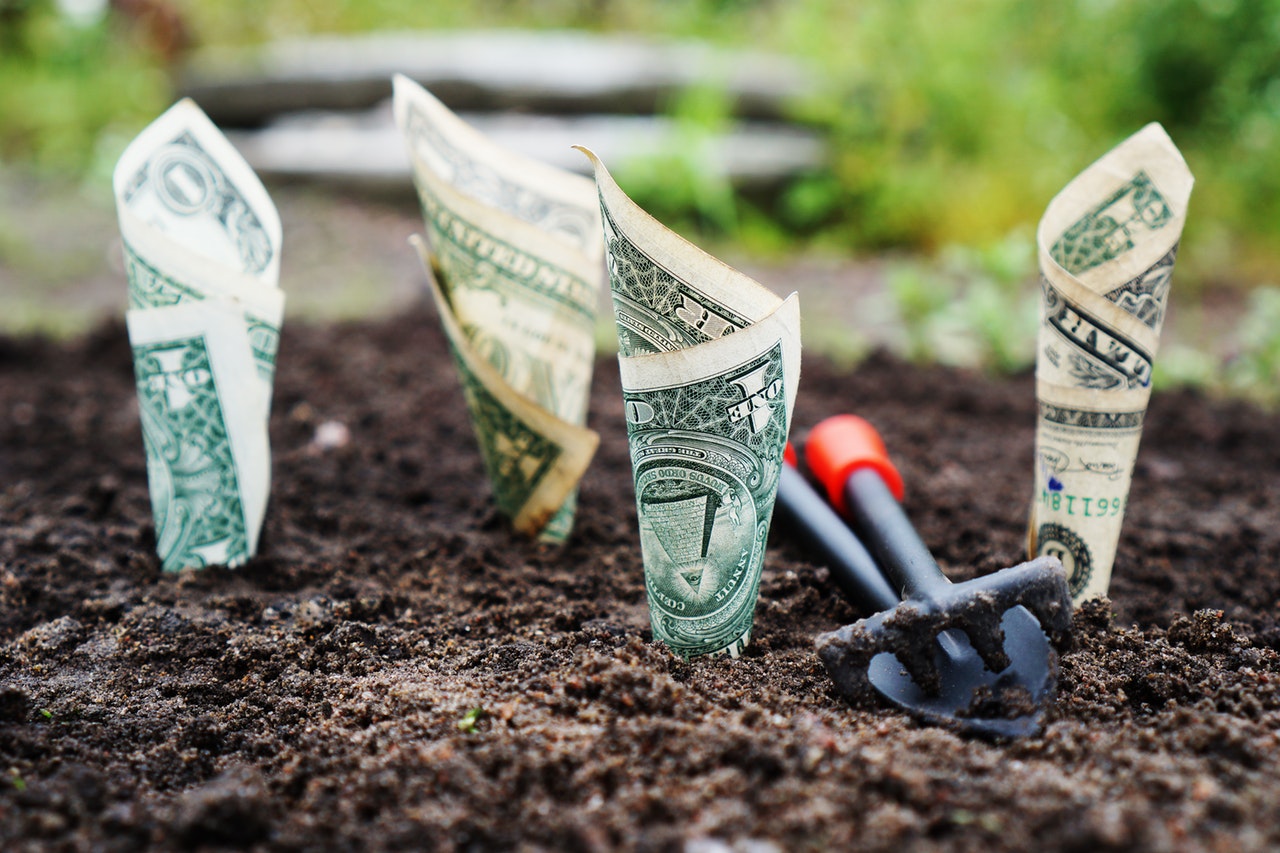 We spoke to Sean Doherty, FX expert at RationalFX about FX markets in April 2018. The second half of April has challenged accepted values. The dollar’s decline is not a one-way street. The euro is not Old Faithful, ever-ready to deliver a reliable performance. Sterling’s stolid post-referendum recovery is not assured. Most importantly, investors can make silly trading decisions even when they know they are silly, as long as they expect them to be profitable. 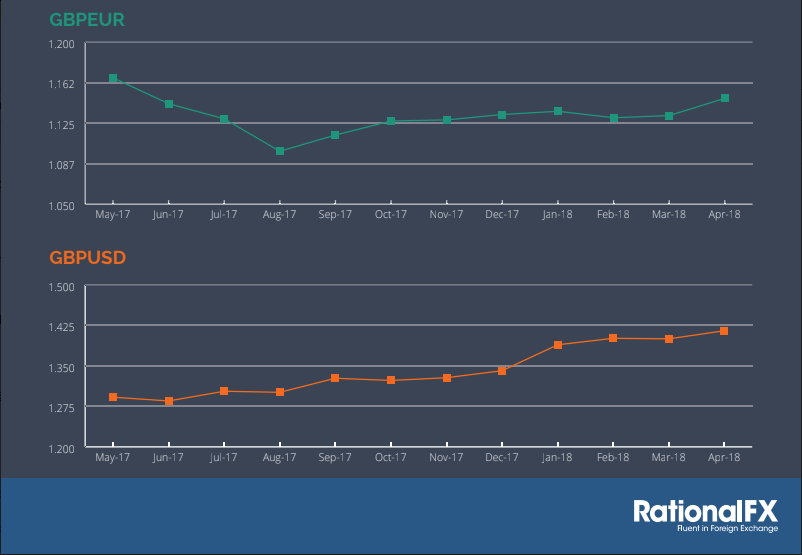 Sterling pottered into April with no sense of purpose and vaguely on the defensive. Six days into the month it perked up in response to disappointing US employment data and it headed higher for another ten days. Thereafter, the pound was on the retreat.

Three sets of UK economic data – for jobs, inflation and retail sales – in as many days took the wind out of sterling’s sails. No sooner had they knocked it back than Bank of England governor Mark Carney stepped in with his own cudgel. He warned that the interest rate increase widely expected to take place in May, which had been baked into sterling’s price since last year, might not actually happen.

On the list of things that didn’t dent the pound, the most notable is Brexit. With many politicians on both sides of the Channel enjoying extended Easter breaks there was nobody around to stir things up. Contrary to three votes in the House of Lords, Downing Street continues to insist that remaining in the EU customs union is not an option but investors tend to believe otherwise. They can see no practicable alternative if the Irish border question is to be solved, and so are relatively relaxed on the matter.

Footnote: Early in the month the FX analyst at a big American bank helpfully pointed out that, for the last 14 years, the pound has always strengthened against the US dollar in April. At the time of writing it is actually a cent down, thus proving that past gains are not a reliable indicator of future performance. 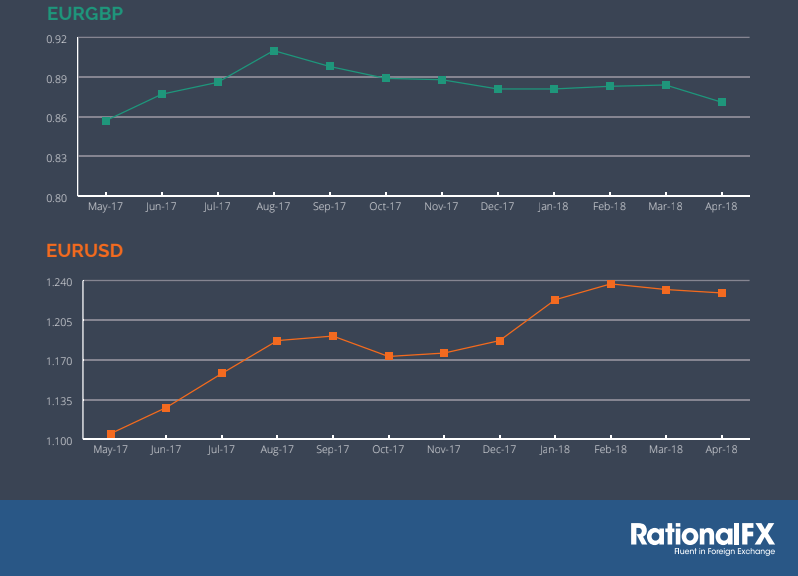 Picking the highlights out of the euro’s month is like choosing the most interesting parts of a lettuce. The common currency put in an average performance in an average way, strengthening by an average of 1.0% against the other ten most actively-traded currencies mainly because of notable underperformance by the safe-haven Swiss franc and yen. It added a quarter of a cent against sterling and lost a cent and a quarter to the US dollar.

From an economic point of view the sensation is that the euro zone economy has somewhat lost its mojo. The recent data have not been as punchy as they were a couple of months back. There is nothing obviously nasty: G10 as a whole is reporting less vivid numbers than before, so Euroland is not an obviously bad apple. But inflation is stuck at 1.3%. Business confidence is jaded. Industrial output is fading. The whole picture looks a little moth-eaten.

One factor that certainly is dampening investors’ appetite for the euro is the European Central Bank’s foot-dragging reluctance to begin taking monetary policy back to “normal”. With inflation still well below its 2% target it is understandable why the ECB is reluctant to change tack. But investors don’t particularly care about the reason; they care that the central bank is still printing €30bn a month in its quantitative easing programme and shows no inclination to stop doing so any time soon. 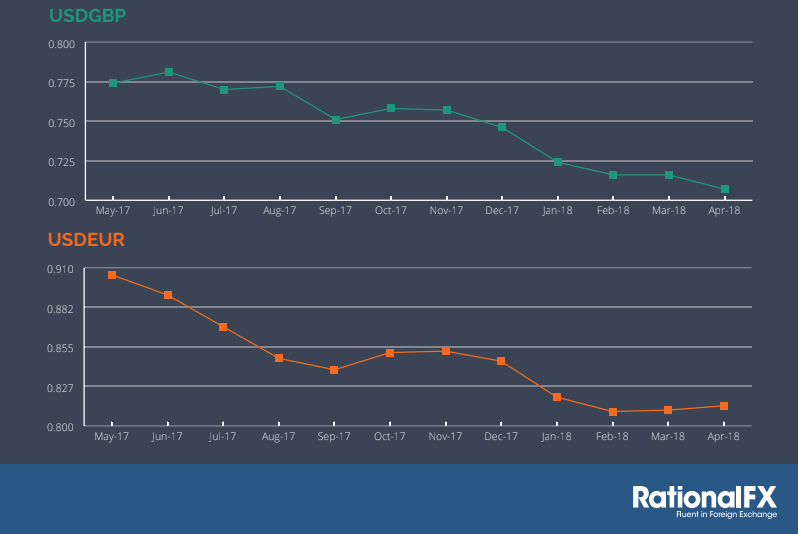 From the beginning of last year the consensus among investors was to sell the dollar. For the whole of 2017 that philosophy held true and it served them well to short the US currency. In the first three months of 2018 the strategy did not cost them money but in mid-April it started to hurt and they began to question its validity.

The logic might seem shaky but it works like this: big tax cuts and increased government spending lead to widening budget deficits and rising inflation. Widening deficits and rising inflation make for higher yields on government bonds and increased interest rates. Everybody likes higher interest rates even, apparently, if it means ignoring the structural problems which bring them about.

In mid-April attitudes to the dollar shifted through 180º, sending the dollar higher and shaking out the short positions which had become so entrenched. People were not necessarily buying it because they liked it. They were doing so because it was going up and they had to cap their losses. They did not have to agree with the rationale: they had to get out of the way of the oncoming truck.

It remains to be seen how long this suspension of disbelief can endure. Panicking out of a short position is one thing: cold-bloodedly going long of the dollar is quite another. A storming performance over the space of one week is impressive but it is not automatically a sign of things to come.

The second half of April has challenged accepted values. The dollar’s decline is not a one-way street. The euro is not Old Faithful, ever-ready to deliver a reliable performance. Sterling’s stolid post-referendum recovery is not assured. Most importantly, investors can make silly trading decisions even when they know they are silly, as long as they expect them to be profitable.