Cloudy With A Chance of Silver Linings Part 2

We’re back with the second part of our article on silver and how to predict its price movements. In this part, we will be focusing more on some technical analysis,… read more → 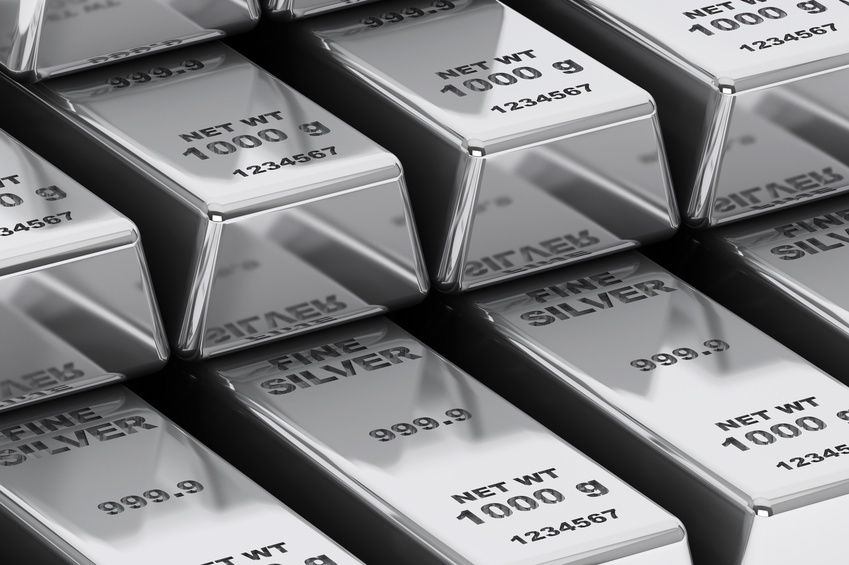 We’re back with the second part of our article on silver and how to predict its price movements. In this part, we will be focusing more on some technical analysis, demand-supply data and ultimately draw a conclusion on our findings. Investing in silver is not limited only to those born with a silver spoon (no pun intended), but it does require some amount of research and analytical skill.

There are two crucial types of silver prices; spot prices and futures prices. Spot price is the price silver is trading at this instance (literally), while the futures price represents the market price at which future deliveries of silver are traded. It might be a bit hard to wrap your head around it for budding finance enthusiasts (derivatives and options can get really freaky, that’s partially what caused the 2008 financial crisis: complicated derivatives), but essentially futures are contracts to buy or sell a commodity in the future.

Scrutinising the spot prices, I conducted some basic technical analysis to have a better feel of where silver prices will head in the short term. The daily chart of silver below shows promising potential. 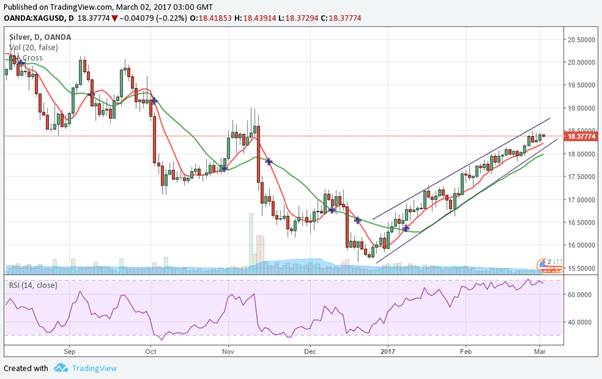 1)    Two lines drawn from the start of 2017 up until March shows a period of rising highs and rising lows, indicating a bullish uptrend in the market. However, given the smaller Elliot waves (oscillations of lower magnitude) and a narrowing of the two lines, it’s possible that this trend is slowing down; we cannot say for certain. Most investors agree that the 18.50 level will be a crucial level as it provides potential resistance to the uptrend, meaning the rise of prices may stop around that region.

2)    The Relative Strength Index (RSI), which measures if a stock or commodity is overbought or oversold, is hovering at the 70 mark. Generally, investors take RSI values above 70 as an indicator that it is overbought, while an RSI of below 30 indicates overselling. Thus, the RSI shows that the uptrend is potentially at its end.

3)    A plot of the 9-period and 21-period moving averages (MAs) also indicate bullishness, with the 9-period MA above the longer term 21-period MA (this shows a rising trend). However, I argue that the two MAs are on course for another crossover soon (which indicates a downturn signal).

Given the technical indicators of the price chart, I believe silver prices will rise, break past the 18.50 mark (which will form the next support level) but potentially bounce around that region for a while. This is strengthened by predicted outlooks of silver supply and demand, as I will address later, that seem positive for higher prices.

Spot prices and futures prices move in an almost perfect correlation, so we will endeavour to look at other data instead. Silver spot and futures have exhibited this tendency for a while, implying relatively little speculation relative to the current (realised) price. The blue line indicates the spot price, while the candlesticks (those red and green bars representing the price) show the futures prices. A general rule would be for the spot and futures prices to converge as the futures contracts are nearing delivery time (due to arbitrage mechanisms). 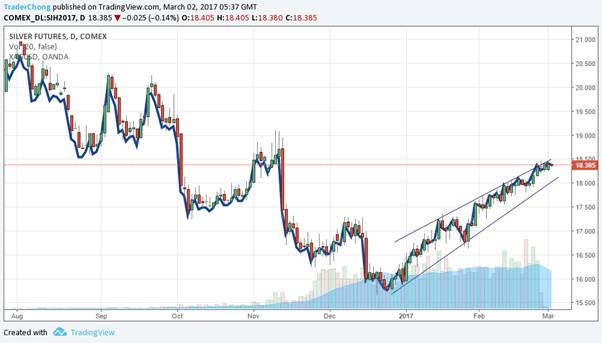 Staring at charts and speculating isn’t the best way to draw a conclusion, so we turn to some statistics on the silver industry for additional confirmation.

In a report by CRU Consulting, the demand for silver in PV cells and ethylene oxide (EO) is bound to rocket sky high. EO is primarily used for manufacturing packaging and automobile antifreeze. Given rising consumption in packaged goods and car purchases in emerging economies (read China), this spells out a huge demand for silver moving forward. The graph below shows the potential impact of this demand for EO. 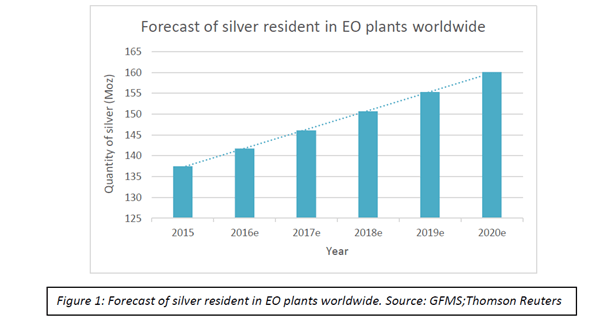 PV cells will be in demand due to the commitment of China and Saudi Arabia, as well as other nations (European countries with the Paris Agreement to cut carbon emissions) to transition to renewable energy.

Capacity for PV cell production has increased and PV cell costs have declined below that of thermal coal, making solar energy a viable competitor to traditional energy sources and thus boosting demand for PV cells, and by extension silver. The Silver Institute expects PV cell demand for silver to increase by 75% in 2018, which is certainly a significant figure. 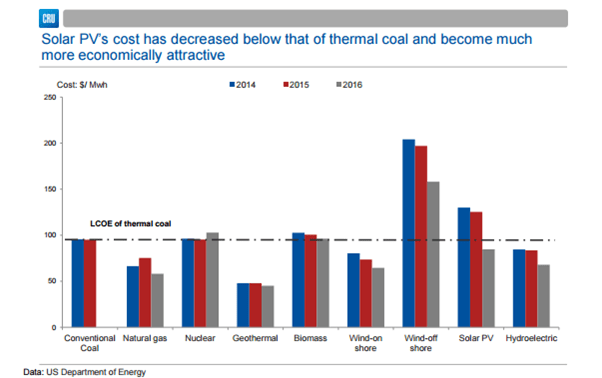 Given these signposts pointing to the growing prominence of silver, we turn to broader industry data to see what it can tell us. According to supply and demand data from the World Silver Survey 2016, physical demand is mostly supported by industrial use, and to a lesser extent jewellery manufacturing. The dip in industrial demand over the past year has probably been affected by the global economic slowdown especially in main demander China, but given our reasoning of rising demand impending, silver is set for a good overall physical demand surge. 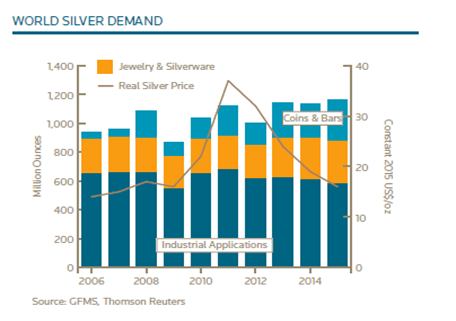 Silver supply, I contend, is harder to predict. Last year, lead and zinc suffered low prices due to the soft economy, and major producer decided to cut production to stabilise prices. Lead and zinc are very related to silver production (for an explanation why click here) due to by-production, thus the fall in zinc and lead production will lead to a fall in silver supply too.

Should this continue, silver will be in a position for a price hike, but prices for zinc and lead appear to be recovering very well (article here). If supply picks up, this could mean the end for the bullishness silver has been enjoying this year so far. This leads me to further believe the price of silver will continue to rise but not for much longer; it will then stabilise at a support level as supply rises to meet rising demands.

Another interesting thing to note would be two of the three main suppliers of silver, Mexico and China, are coincidentally countries that are expected to suffer from Trump’s trade policies. Given that sour outlook, it remains to see if their exports of silver will be affected in the longer term due to trade policy changes (if Trump does carry on with his threats of building a wall and cutting trade). 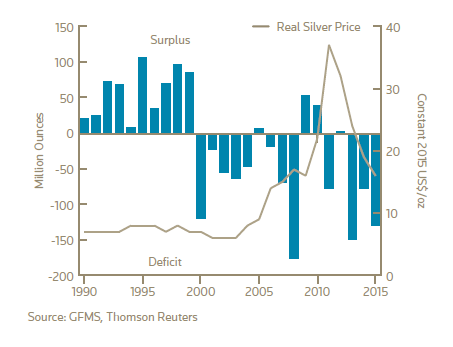 Physical silver has been in a supply deficit for 4 out of the past 5 years. This is a good indicator of an imminent price hike especially since demand for physical silver is set to rise further, but not good enough as a significant portion of demand for silver comes from investments in paper silver (futures, ETFs etc.).

Futures contracts figures show investors increasing long positions and reducing short positions, indicating their bullish sentiment of a price rise. Just how long this will last is another question… 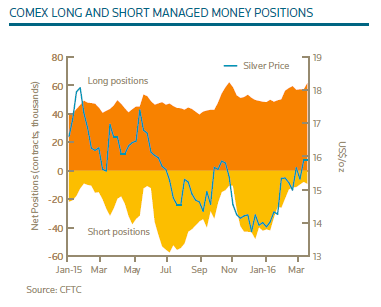 It should be noted that investments in silver are, just like any other commodity, subject to risks of all natures (currency risk, default risk, etc.). As such, financing such investments (such as an import of silver for bulk purchases) does not come easy. A popular way of funding such undertakings is trade finance, which can come in many forms and from various credit providers. Speculators also play a role in moving the price of silver via investments, though trade finance typically does not apply to them.

In A (Silver) Nutshell

Predicting price movements of any commodity are never 100% infallible (if not we’d all be millionaires trading off them!) but from what we know, we would argue for the case of a short-lived price rise before consolidation at a level for a period of time. In the very far future (years from now), it should be quite safe to say that silver prices will be on an upward trend as silver will only get more important and more scarce.