GBP/EURO Exchange Rates – what’s happening? What a month April has been for the UK currency – the pair has moved off a bottom at 1.2319, reached on the 7th… read more → 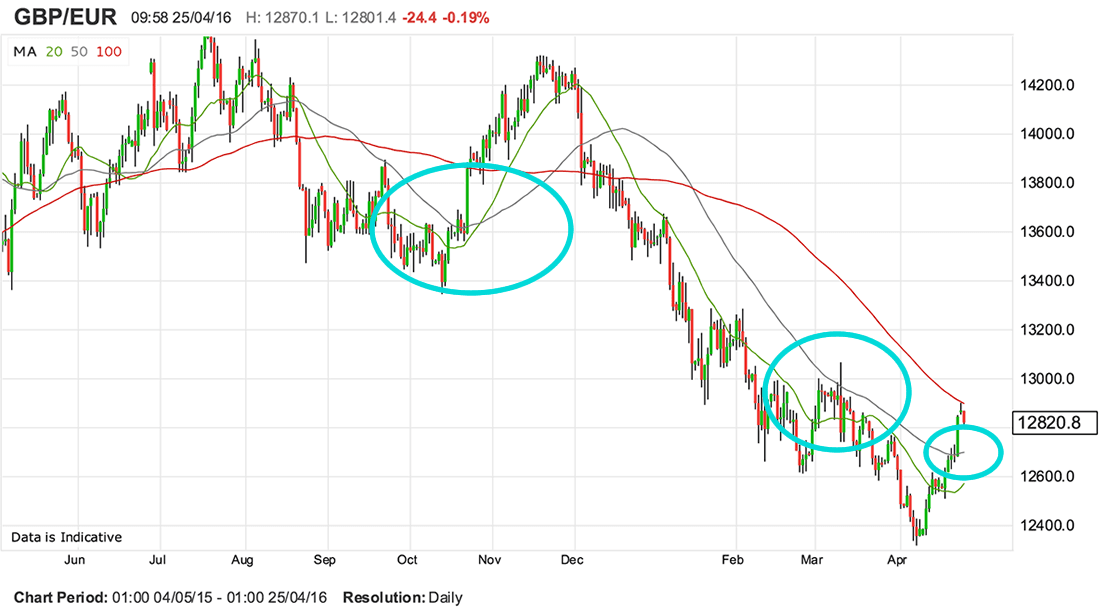 What a month April has been for the UK currency – the pair has moved off a bottom at 1.2319, reached on the 7th of April, to hit the 1.28 levels seen at the start of the week.

It has been a difficult few months for sterling with speculative traders hitting the sell button on the realisation that the EU referendum offers a whole bag of uncertainty and the currency is the most obvious expression of this uncertainty.

Of course, much of the decline in GBP is also actually due to a spike in hedging demand by foreign investors looking to protect against any potential negatives that an UK exit from the Eurozone would present to their UK investments.

Either way, what we have here is a ‘brexit premium’ – the difference between where the British pound would be were there no referendum in 2016 and where it currently finds itself.

Importantly, this premium is hard to gauge and very much sentiment driven. Therefore, the gap between fair value and reality can widen and narrow, and we have been seeing it narrow over recent weeks.

That does not mean to say we have seen the end of the brexit story, should odds swing towards a brexit then the pound sterling will almost certainly decline once more.

On this note, don’t watch the opinion polls, rather keep an eye on the odds being offered by the bookmakers. Economists, analysts and markets are taking instruction from the betting markets and presently there is around a 70% chance of a Remain vote winning the day.

Where Next for the Pound / Euro Rate?

As mentioned the pound’s performance has been very much sentiment driven of late which also implies that technical considerations are playing a larger role than would normally be the case.

As such, we find the GBP/EUR charts very helpful in anticipating further moves.

One indicator in particular has been useful – the moving average.

On the daily chart the moving average is pretty much what it says on the tin – the average price for GBP/EUR over a given timeframe.

The moving average can however give traders a useful reference point from which to place orders as a trend can often stall and reverse when it runs into its moving average.

Look at the below and note how in March 2016 the GBP/EUR was just not able to move above the 50 day moving average, depicted by the middle turquoise circle, as the supply of GBP onto the market by sell-order triggers proved overwhelming:

However, go back in time to October 2015 and look at the rally that ensued when a break out of the 50 day happened. Supply of sterling quickly turned to demand as sell orders were forced into submission.

This April we have another break of the 50 day moving average which has seen another quick run higher.

Importantly though, we don’t expect the advance to mirror the 2015 advance. Why? Because of that red line in the graphic.

This is the 100 day moving average and again there is a good supply of sterling at this level.

We will need to see another significant closing of the Brexit premium gap if a break of this level is to occur.

We are therefore forecasting a potential consolidation in GBP/EUR as markets continue to be dominated by technical considerations and an ingrained uncertainty concerning the upcoming EU vote.